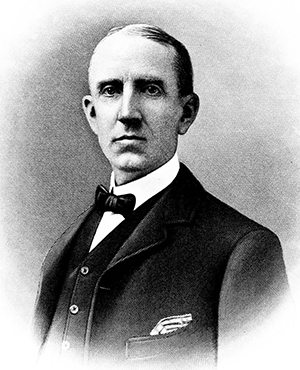 Frank Sheppard Royster, Sr., industrialist and philanthropist, was born in Granville County on the farm of his father, Marcus D., near Oxford. Marcus, the son of Francis and Elizabeth Sheppard Royster, was of Scotch-Irish descent. He married Frances Young Webb, daughter of John and Margaret Howard Webb, also of Granville County. Marcus and Elizabeth spent their lives on the land they tilled for their livelihood.

Frank S. Royster, the third oldest of five children, attended Oak Hill Academy, near his father's home. At age twelve he was sent to Bethel Academy, Person County, under the care of the Reverend T.J. Horner. He remained with Horner until the end of the Civil War, when he returned home to help on the farm and in his father's store. In 1870 Royster started his business career as a clerk for O.C. Farrar in Tarboro. He later became a partner in Farrar's merchandising firm, which furnished all kinds of supplies to farmers. Royster was credited with the discovery of the remedy for cotton rust and the use of bainit, a salt imported from Germany, in the manufacture of fertilizer.

In 1881 he founded in Tarboro the firm of Royster and Strudwick to provide general supplies to farmers and to manufacture and sell fertilizer. Ten years later he established and became president of F.S. Royster and Company, in Norfolk, Va., as a wholesale dealer in flour, sugar, and provisions. The firm also began producing fertilizer on the premises rented from M and M Steamship lines. From this humble beginning S. Royster and Company became the largest independent, closely held fertilizer firm in the country, with some twenty-five manufacturing plants in the southeastern and middle western United States. The management was continuous and successful, stemming from the business ethics and principles of its founder and his associates. Royster remained president until shortly before his death.

A leader in civic and religious affairs and an elder in the Presbyterian church, Royster gave generously to the Norfolk General Hospital, Union Theological Seminary at Richmond, Va., and countless civic causes. He was the first president of the Norfolk-Portsmouth Chamber of Commerce and a director of the Norfolk and Western Railway, Chesapeake Steamship Company, and Virginia National Bank. 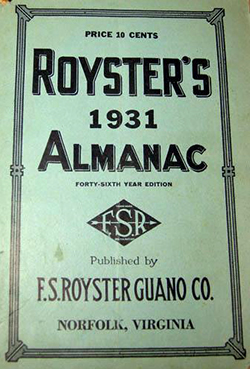 My brother just sent me this.

My brother just sent me this. He is a history nut. My grandfather was William Henry White and my grandmother was Mary Stamps Royster. They lived in Charlottesville, Va where my grandfather practiced law. Their home was named Flordan. I think they also lived in Norfolk at one time. I'm not too good at this, but would love to make contact with relatives,

Morning! My uncle, Donald Harper, 83, of Stanardsville, Virginia recently gave me some paperwork and pictures pertaining to F S Royster Guano Co. His father, Joseph Neverson Harper, SR (my grandfather, though I never met him) worked for Royster for many years. Mr. Joseph Harper, Sr. died while employed with Royster in 1956. I'm trying to find a home for these artifacts. One is a Royster's 1936 Almanac. Another is a picture that has 'The Bradford Family of Roysters' on the back, written in my grandmother's handwriting.
Any suggestions would be helpful as to who might have a vested interest in these pieces. Thank you!

Cindy, if you still have the

Cindy, if you still have the artifacts, my family would be delighted to have them. F.S. Royster was my great great grandfather. I'm named for his daughter and granddaughter, Mary Stamps.

Hi.. I am writing a book

Hi.. I am writing a book about the Cooke-Royster house in Va beach Va.. would love any stories or photos your family might have... I'm happy to share what I have found.. thanks..