John Henry Rogers, attorney, congressman, and judge, was born near Roxobel, Bertie County, the son of Absalom and Harriet Rice Rogers. In 1852 the family moved to Mississippi and settled near Madison Station, where young Rogers attended the common schools. During the Civil War he served in the Ninth Mississippi Volunteer Regiment, advancing in rank from private to first lieutenant. He participated in battles in Georgia and in nearly all of the battles in which the Army of Tennessee was engaged; he was wounded twice. After the war he attended Centre College, Danville, Ky., and was graduated from the law department of the University of Mississippi at Oxford in 1868. Admitted to the bar, he practiced first in Canton, Miss., and then in Fort Smith, Ark. In 1877 he was elected circuit judge; reelected the following year, he served until his resignation in May 1882. He was elected as a Democrat to the Forty-eighth Congress and was returned three times, serving from March 1883 to March 1891. In 1895 he made the commencement address at Centre College and was awarded the LL.D. degree. 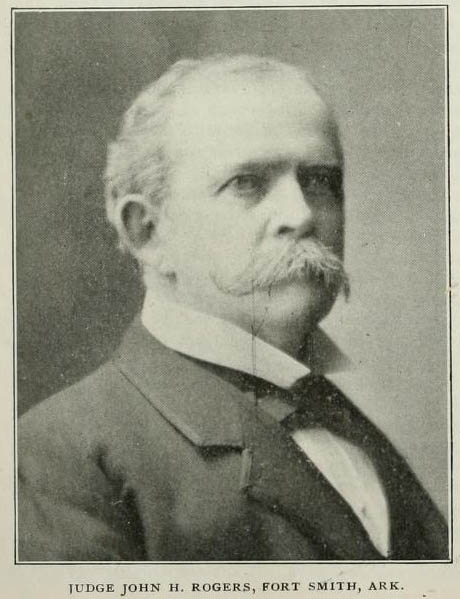 In Congress, as a member of the Committee on the Judiciary, Rogers focused his attention on the court system and on the administration of the Indian Territory. Declining to be a candidate in 1890, he resumed his practice in Fort Smith. In 1892 he was a delegate to the Democratic state convention and to the Democratic National Convention in Chicago. On 27 Nov. 1896 President Grover Cleveland appointed him U.S. district judge for the Western District of Arkansas, a post he held until his death in Little Rock.

An active Mason, Rogers was also a member of the United Confederate Veterans; on 22 May 1903 at the Confederate reunion in New Orleans, he delivered an impressive address reviewing the history of the idea of secession from early New England threats through the Civil War. Coming from a federal judge and former congressman, his remarks attracted national attention when they were printed as The South Vindicated. The original typescript copy is in the Southern Historical Collection at the University of North Carolina at Chapel Hill. Several other of his addresses were also published, including one on John Marshall on the occasion of the one-hundredth anniversary of his accession to the chief justiceship of the United States.

Rogers married Mary Gray Dunlap in October 1873 at Danville, Ky., and they became the parents of four sons, the first of whom, Theodore, died at age two, and a daughter. His surviving children were Albert Dunlap, John H., Jr., Randolph, and Bessie (Mrs. Roy Johnston). The town of Rogers, a mountain resort in northwestern Arkansas, was named for him. He was buried in Oak Cemetery, Fort Smith.