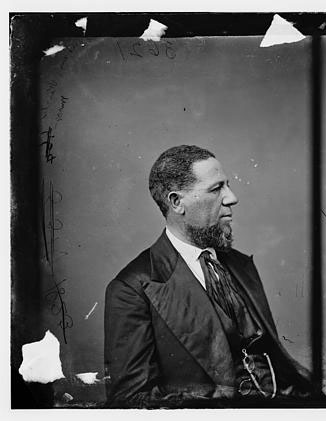 Hiram Rhoades Revels, first black U.S. senator, Methodist minister, and educator, was born in Fayetteville of free black parents who were of mixed Croatan (Lumbee) Indian and African American blood. At an early age he moved to Lincolnton, where for several years he served as a barber. In 1844 he entered a Quaker seminary at Liberty, Ind., for two years, where he acquired little more than an elementary education. After briefly attending a theological school in Drake County, Ohio, he completed his formal education at Knox College in Illinois. Revels was ordained a minister in the African Methodist church while in school and subsequently served religious missions to blacks in Ohio, Illinois, Indiana, Missouri, Kansas, Kentucky, and Tennessee.

When the Civil War began Revels moved to Baltimore and, in addition to his usual role as a minister, took charge of a high school for black adults. He also assisted in organizing two black regiments for service in the Union army. In 1863 he moved to St. Louis, where he established a school for freedmen and aided in the recruitment of another black regiment for Federal service. Motivated by a desire to bring religious instruction to the wretched members of his race who followed Ulysses S. Grant's army into the lower Mississippi Valley, Revels went to Mississippi in 1864 and organized several black churches and schools. Although he left the state for a brief period to do missionary work in Kentucky and Kansas, he settled permanently in Mississippi in 1866, choosing Natchez as his place of residence. In 1866 he transferred his church membership from the African Methodist church to the Methodist Episcopal Church, North, but remained a minister.

Revels's entry into Reconstruction politics occurred in 1868, when the military commander tapped him to serve on the Natchez City Council. Virtually by accident, as a compromise candidate, he secured the local Republican nomination to the state senate in 1869, which was tantamount to election in the Natchez District. His prayer opening the legislative session of 1870 made such a profound impression upon the members that they selected him to fill the short term in the U.S. Senate (reputedly the unexpired term of Jefferson Davis).

As the first black member of the Senate, where he served from February 1870 to March 1871, Revels was more of a curiosity than a mover of men or an instigator of legislation. He did advocate, however, in a speech before that august body, the passage of a measure that would permit blacks voluntarily to attend white schools in the District of Columbia. He also spoke against the readmission of Georgia to the Union until that state guaranteed the political rights of blacks. On the other hand, in another address, he called for the immediate removal of the political disabilities of former Confederates. While Congress was recessed in 1870, he made an extended tour of the Northwest, speaking optimistically about the future of his race in America. Upon the expiration of his term, he returned to Mississippi and accepted an appointment as the first president of Alcorn University, a small black college north of Natchez. He also served briefly as secretary of state ad interim of Mississippi. As a moderate he supported the James L. Alcorn wing of the state Republican party in the bitter factional fight against the Adelbert Ames Radicals.

When Ames won out and became governor in 1874, Revels was dismissed from his offices. Returning to his ministerial work, he soon joined the Methodist Episcopal Church, South. During the "Revolution of 1875," which overthrew Republican rule in the state, Revels joined in the conservative attacks on the Radical Ames administration, although he affirmed his allegiance to the Republican party. When the conservatives came to power in early 1876, he was restored to the presidency of Alcorn University, in which capacity he served ably under difficult circumstances until 1883. After his retirement he moved to Holly Springs, Miss., where he continued his religious work. He died while attending a church conference in Aberdeen. Revels married Phoebe A. Bass and was survived by two of their five daughters.