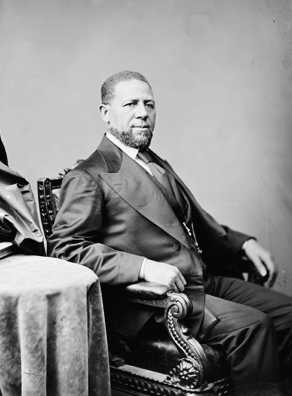 Hiram Revels was born in Fayetteville, North Carolina, in approximately 1827 (the 1850 Census lists “about 1825”), but an exact birthplace has not been identified. He was born to free parents of mixed African and Croatan Indian heritage. In March 1838, Revels was apprenticed to his brother as a barber in Lincolnton, North Carolina. Although Hiram Revels' apprenticeship was to last until his 21st birthday, his brother died in 1841, leaving Hiram to manage the barber shop.

Revels apparently left the barber shop to further his education. In 1844 he was a student at the Beech Grove Quaker Seminary in Liberty, Indiana. He also attended school in Ohio and was a student of Knox College. Revels was ordained as a minister by the African Methodist Church and traveled extensively, ministering to African American congregations in Ohio, Indiana, Illinois, Tennessee, Kentucky, Missouri, and Kansas. He eventually settled in Baltimore, where he became principal of a school for African Americans as well as pastor of a local church.

With the outbreak of the Civil War in 1861, Hiram Revels turned his resources toward support for the Union cause in Maryland, a border state with divided loyalties. Revels aided in the organization of two regiments of African American troops from Maryland. Having moved to St. Louis to organize a school for African Americans, he recruited African American men for service in a Missouri regiment in 1863. His recruiting ability and ministerial training equipped Revels for active service as a Union chaplain serving with a Mississippi regiment of free blacks. Some records indicate that Revels was for some time the provost marshal, or at least assisted the provost marshal, of Vicksburg, the militarily important Mississippi River town and scene of a bloody and prolonged Union siege.

At the conclusion of the war, Revels settled in Natchez, Mississippi, and joined the African Methodist Episcopal Church. He continued his pastoral duties and founded new churches. In 1868, Revels was elected alderman. Struggling to keep his political and pastoral duties separate and to avoid racial conflict, Revels earned the respect of both whites and African Americans. His moderation and efforts at conciliation led to his election as a state senator from Adams County, Mississippi. In 1870 Revels was elected as the first African American member of the United States Senate.  Revels took his seat in the Senate, after contentious debate, on February 25, 1870 and served through March 4, 1871.

Returning to Mississippi in 1871, Revels was named president of Alcorn College, the state's first college for African American students. He was dismissed from the Alcorn presidency in 1874 by Governor Ames but returned to the position two years later. Revels retired from Alcorn in 1882. Aside from his duties at Alcorn College, Revels served as Secretary of State ad interim for Mississippi in 1873. Revels actively participated in the 1875 political campaign to oust the "carpet-bag" government of Mississippi. He defended his actions in a letter to President Ulysses Grant which was published in the Daily Times of Jackson, Mississippi, and widely reprinted (Read a portion of the letter here). The next year he became editor of the Southwestern Christian Advocate. While attending to these public activities, Revels actively continued his religious work. It was while attending a church conference in Aberdeen, Mississippi that Hiram Rhoades Revels died on January 16, 1901.