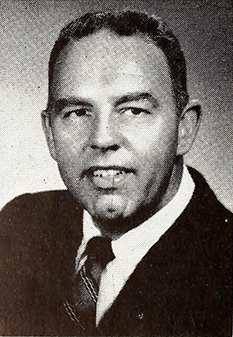 Young Reid attended Mars Hill Junior College and was graduated from Wake Forest College in 1937 with a degree in physics. Between 1938 and 1942 he was a staff announcer for radio stations in Asheville, Wilson, Greenville, S.C., and Raleigh. During World War II he served in the Aleutian Islands with the Naval Air Force for two years and afterwards was radar officer at Adak, Kokiak, and Attu, and finally with the Bureau of Ships in Washington, D.C. He returned to radio station WPTF in Raleigh as staff announcer, sports director, and weather reporter; in 1958 he became manager of the Raleigh office of WTVD television station. From October 1960 until his death he was senior vice-president of Branch Banking and Trust Company in Raleigh. Reid also had a political career, serving on the Raleigh City Council, as mayor pro tem, and as mayor. In these municipal offices he actively supported improved race relations, library service, the construction of a new municipal building, and other causes.

It was as a radio and television personality, however, that Reid was best known. He won numerous awards, particularly in the field of sports broadcasting and for his thrice-daily weather programs. His interest in meteorology stemmed from his naval experience, and he was active in the North Carolina chapter of the American Meteorological Society, being the first nonprofessional to receive the national organization's Special Award. Reid served on countless boards, commissions, and committees at the local and state levels and rendered effective service in such diverse areas as rent control, airport development, community planning, youth fitness, and music.

Reid married Elizabeth Davis of Wadesboro and they were the parents of Michael E., Nancy K., and James W., Jr.