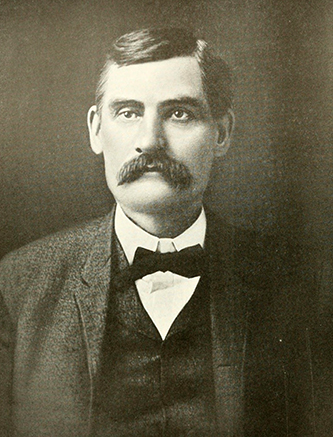 Alexander Martin Rankin, Methodist Protestant lay leader and benefactor, manufacturer, and industrial pioneer, was identified with the activities of the Annual and General conferences of the Methodist Protestant church for forty years and was a prominent supporter of the Methodist Protestant Children's Home in High Point and High Point College. "Captain Rankin," as he was affectionately known, was the son of William Wharton and Louise Roach Rankin of Benaja, Rockingham County, and attended Yadkin College. For more than twenty years, he was a conductor on the Southern Railway System; later he was president of the Kearns Furniture Company, Carolina Casket Company, Tate Furniture Company, and Alma Furniture Company. He served as a member of the High Point City Council from 1905 to 1909 and as a director of the High Point Mantel and Table Company and the Bank of Randolph. He was also engaged in business enterprises in nearby Greensboro and Asheboro. Rankin suggested the "Century of Progress" observance that was held in High Point in 1938.

Captain Rankin took an active interest in the establishment and maintenance of the Methodist Protestant Children's Home in Denton and gave $500 when the home was later moved to High Point. He served as a trustee from the time the home opened until his death; after 1914, he was secretary-treasurer. In 1901 he was appointed to a ways and means committee to consider the establishment of a Methodist Protestant college in North Carolina, and in 1910 he was named a trustee of the North Carolina Conference Board of Education. He was instrumental in the founding of High Point College, gave $10,000 to it, and served as a trustee from 1924 until his death. He was also a trustee, and treasurer for more than twenty years, of the First Methodist Protestant Church of High Point. Rankin Memorial Methodist Church, founded about 1935 in High Point, was named in his honor.

Rankin attended ten General conferences of the Methodist Protestant church, beginning in 1903; for this distinction, he was honored at the General Conference of 1936 which met in High Point.

Rankin married, first, Mamie Belle Reece, who died in childbirth; they had one daughter who lived for only three years. In 1898 he married Lena May Blair, daughter of Joseph Addison and Martha White Blair of Asheboro. One of their children died young, but surviving were Margaret, Alexander M., Jr., Dorothy Lee, Robert Blair, and Jeanne Blair. Rankin died in High Point and was buried in Oakwood Cemetery.