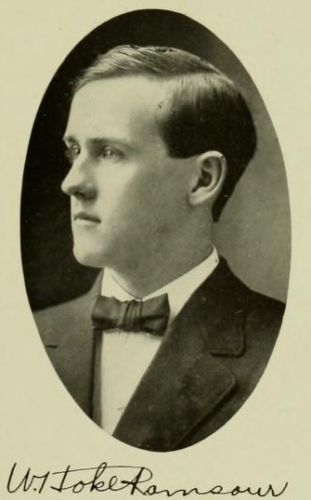 William Hoke Ramsaur, YMCA secretary, Student Volunteer Movement traveling secretary, Episcopal priest, and missionary, was born in China Grove of German and English ancestry. His father was Dr. George Alexander Ramsaur, a physician residing in Rowan County but a native of Lincoln County, where the Ramsaur family had settled prior to the American Revolution. His mother was Nancy Ellen Hoke Ramsaur, whose father, Colonel William James Hoke, entered Confederate service as captain of the Southern Stars and later commanded the Thirty-eighth Regiment of North Carolina Troops and whose mother, Georgiana Turner Sumner Hoke, was descended from Colonel Jethro Sumner (first cousin of Brigadier General Jethro Sumner) of the North Carolina Continental Line during the Revolutionary War.

Ramsaur was the second of six children and the eldest of four sons. Educated in the grade school of China Grove, he entered Catawba College at Newton in 1905 and spent two years studying to become a physician. He transferred to The University of North Carolina as a sophomore in 1907. Working to pay his expenses, he nevertheless found time as a senior to serve as president of the university YMCA and was graduated in 1910 with the A.B. degree. Having dedicated his life to Christ, he spent two years as secretary of the YMCA at the University of Alabama. Then in 1912, having enrolled as a member of the Student Volunteer Movement for Foreign Missions, he entered the junior class of Philadelphia Divinity School (Episcopal) to begin preparing for foreign service. From 1913 to 1915 he was engaged as a traveling secretary for the Student Volunteer Movement. Returning to the Divinity School, he served at a Philadelphia mission center and completed his theological course in 1917, graduating with highest honors and the bachelor of sacred theology degree.

Ordained to the diaconate of the Protestant Episcopal church on 2 Aug. 1914, Ramsaur was advanced to the priesthood on 15 July 1917. The Right Reverend Joseph Blount Cheshire, bishop of the Diocese of North Carolina, who officiated at both ordinations, held in St. Luke's Church, Salisbury, later wrote of Ramsaur: "Among all the young men whom I have ordained to the Holy Ministry, I do not think there has been one who seemed to me to be of a finer type of young manhood, physically, mentally, and spiritually." Named priest-in-charge of the Church of the Messiah, Mayodan, during the summer of 1917, Ramsaur then returned to the Student Volunteer Movement as a traveling secretary (1917–18). In this service, cumulatively, he is said to have persuaded fifty or more young men to enter the Christian ministry. The summer of 1918 saw a happy and productive pastoral experience for Ramsaur as priest-in-charge of St. Andrew's Church, Greensboro. The fall of 1918 found him studying industrial trades (carpentry, bricklaying, and smithery) at Hampton Institute, Hampton, Va., in special preparation for forthcoming work in Africa.

While American forces were fighting in France during World War I, Ramsaur tried five times but failed to become a military chaplain. Then in patriotic desperation he decided to enlist as a private in the U.S. Army but after a soul-searching struggle of conscience bowed to the authority of Bishop Cheshire, who had overruled his decision. Ramsaur finally obtained an appointment, effective November 1918, as an Episcopal missionary to Liberia, West Africa, thus fulfilling his long-held, self-professed purpose to bring "the light of the life of Christ into Africa." At first he had aspired to evangelize the Moslems, since he deemed them the most difficult to win for Christ. Failing to find such an opportunity, he had offered himself for service in Africa and was eventually assigned to an area where Muhammadanism was making inroads among the Vai tribe.

After a visit in January 1919 to the Pro-Cathedral Church of the Nativity in Bethlehem, Pa., Ramsaur became a foreign missionary of that parish, which provided a modest salary and paid his expenses. Having sailed from the United States on 1 February, he arrived, via France and Spain, in Monrovia, Liberia, on 25 March. Settling eighty miles up the coast at Cape Mount, he engaged in educational, evangelistic, and practical work. Later that year he traveled five days by foot and one by train to Freetown, Sierra Leone, for a serious mastoid operation. Upon recovering, he trekked one thousand miles through the Liberian hinterland, visiting the Golah, Gbandee, Gezee, and Kimbuzee tribes. In his forceful report, "The Call of A Great Opportunity," published in the United States in September 1920, Ramsaur described the background, life, and needs of the peoples he had observed for two months. His call to action stirred Episcopalians throughout the United States.

On 2 May 1920 Ramsaur married Sarah E. Conway, a native of Gloucester City, N.J., who had served in Liberia as a nurse and medical practitioner for nearly seven years. Shortly after their marriage, the Reverend and Mrs. Ramsaur were stationed in the interior, across the lake from Cape Mount at Bendu, where they established the first mission outpost among the Vais.

During a six-month furlough in 1921 Ramsaur and his wife traveled widely through the eastern and midwestern United States, speaking and seeking funds for the industrial departments that he and Bishop W. H. Overs, bishop of Liberia, planned to develop at St. John's School, Cape Mount. During this period he required another mastoid operation, emergency surgery that saved his life. Though still weak, he and Mrs. Ramsaur sailed for Liberia on 3 December.

Shortly after arriving at Cape Mount, Sarah Ramsaur became ill and died on 22 Jan. 1922. Ramsaur bravely continued his work until April, when he contracted pneumonia. After an illness of six weeks and removal to Monrovia for treatment, his heart became affected and he died. His body was carried to Cape Mount for burial beside the grave of his wife.

Concerning his first landing at Monrovia, Ramsaur wrote a friend: "I think it was the happiest day of my life. Liberia! Yes, after years of earnest anticipation, and months of special preparation and patient waiting, I am here. . . . Of God's call to this field I have no doubt, and in spite of all my personal unfitness, I know he has work for me here."

His obituary in the Salisbury Evening Post (Rowan County) referred to Ramsaur as a "brilliant student and an able speaker," who was "well known in Salisbury as well as China Grove and Rowan County." Dr. Frank Porter Graham, writing in The University of North Carolina Alumni Review, declared, "In the death of William Hoke Ramsaur, the University has lost a noble son, the North American Student Movement a crusading volunteer, and the Christian civilization of the west a torch-bearer who counted it an opportunity to lay down his life among the black folk of Africa. . . . Hoke Ramsaur had compressed noble and intense service within the years of his devoted youth. In him the University and religion have been extended and vindicated in heroic proportions. . . . (He was) honored and loved among all who knew him."