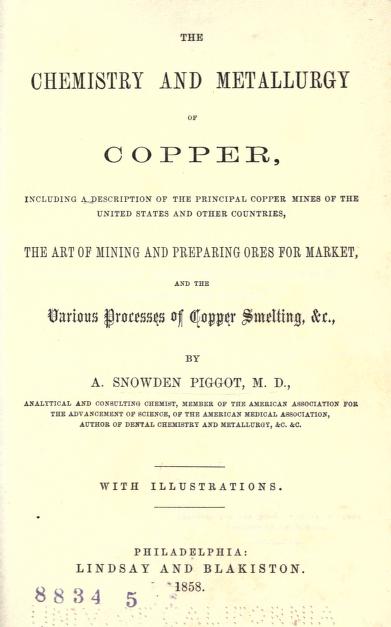 Aaron Snowden Piggot, physician, dentist, chemist, and professor, was born in Philadelphia, the son of the Reverend Dr. Robert Piggot, stipple engraver and Episcopal clergyman, and his wife Rebecca S[nowden?]. He received the doctor of physic degree in 1845 from the University of Maryland, from which he also held the master's degree. His inaugural dissertation was on "Congestion."

Piggot practiced medicine and was professor of anatomy and physiology in Washington University, Baltimore, from 1848 to 1851 and at Baltimore College of Dental Surgery from 1858 to 1861. In the 1850s he was an analytical chemist and a mining consultant. He was coeditor of the American Journal of Dental Science (1856, 1867–69) and professor of chemistry at the Baltimore College of Dental Surgery (1865–69). His textbook, Dental Chemistry and Metallurgy as Applied to the Study and Practice of Dental Surgery (1854), was a pioneer in its field. Piggot also was the author of Art of Mining and Preparing Ores (1858). His books and papers on medical and dental subjects as well as on metallurgy (copper, gold, and silver particularly) were published in the United States and in England. As an expert on metals, he was engaged by the state of North Carolina to prepare Geological and Mineralogical Reports of Mecklenburg Gold and Copper Mines (1860). He contributed literary essays and reviews to the Knickerbocker Magazine, Southern Quarterly Review, Southern Literary Messenger, and Harper's Magazine. Between June 1856 and June 1857 he was the author of a series of five articles on great epidemics published in Harper's New Monthly Magazine.

Early in the Civil War Dr. Piggot cast his lot with the South to work for the Confederate States of America Nitre and Mining Bureau; in 1862 he supervised the construction of the works for smelting lead, copper, and zinc at Petersburg, Va. On 19 July 1862 he was appointed surgeon in the Confederate service, but on 13 Jan. 1863 he was in Lexington, N.C., en route to Georgia to inspect the work of the Nitre and Mining Bureau.

Because of the large quantity of medicinal herbs produced in western North Carolina, the state in May 1863 began to construct a laboratory near Lincolnton to produce medicines for the Confederacy. A new brick building was completed by August and Piggot was employed to supervise the production. He moved his family to Lincolnton, where they attended the local Episcopal church. A botanical garden was laid out and among other plants it grew poppies for the manufacture of opium. Piggot was either captured or surrendered at Lincolnton on 27 Apr. 1865 and took the required oath of allegiance on 24 July. Soon afterwards he returned to his home in Baltimore, where he became professor of chemistry at the Baltimore College of Dental Surgery. He died suddenly four years later at age forty-seven when he was returning home from inspecting a mica mine in Spottsylvania County, Va. He had married Margaret Moore in Baltimore on 13 Oct. 1845, and they were the parents of four children. One of them was Cameron Piggot, M.D. (b. 1856), who taught chemistry first at Johns Hopkins and afterwards at the University of the South, where he was also dean of the Academic Faculty.

Piggot, A. Snowden. The Chemistry and Metallurgy of Copper. Philadelphia: Lindsay and Blakiston. 1858. https://archive.org/details/chemistrymetallu00piggiala (accessed July 16, 2014).

Piggot, A. Snowden. The Chemistry and Metallurgy of Copper. Philadelphia: Lindsay and Blakiston. 1858. https://archive.org/details/chemistrymetallu00piggiala (accessed July 16, 2014).