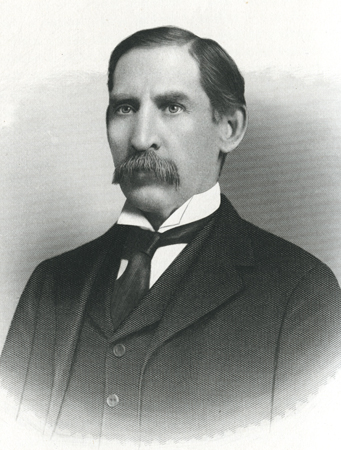 William Simpson Pearson, author, was born in Morganton, Burke County. His parents were Robert Caldwell (9 December 1807–18 November 1867) and Jane Sophronia Tate Pearson (27 June 1807–24 July 1877), both born in Morganton. Pearson was a relative of Governor Tod R. Caldwell and Robert Caldwell, a shipowner from Derry, Ireland, who went to Philadelphia in 1763. Pearson's formal education began in Morganton and was continued in Melville, Alamance County. After his preparation for college by Dr. Alexander Wilson, he entered Davidson College at age fifteen. One year later he transferred to The University of North Carolina, where he received an A.B. degree with honors in 1868.

Later that year Pearson was made a Grant elector and a messenger of the vote, and in 1873 he served as the U.S. consul at Palermo, Italy. After editing the Asheville Pioneer in 1874 and 1875, he was an aide to Governor Curtis H. Brogden and a commissioner of the state for the Western North Carolina Railroad. During his term (1875–77) as a commissioner, Pearson initiated the practice of having convicts work on the mountain section of the railroad, established a telegraph line in western North Carolina, placed the town of Newton on the main line, and inaugurated a system of cheap excursions in western North Carolina.

In 1880 Pearson began practicing law, and in 1881 his political novel, Monon Ou; or, Well Nigh Reconstructed, was published. This novel demonstrated his expertise in political history. During the remainder of his life, Pearson held numerous positions including commissioner of the state hospital at Morganton (1877–82), computer in the supervising architect's office (1883–85), state attorney for the Eastern Building and Loan Association (1893–98), editor of the Farmers' Friend and Morganton Herald (1897–1901), referee in bankruptcy (1898–1904), Bryan elector (1900), state senator from the Thirty-fourth District (1905), and trustee of The University of North Carolina (1905–7).

Pearson married Bettie Venable Michaux on 7 June 1882, and they became the parents of five children: Susie, Paul, Ada, Richard, and Grace. He was a Chi Phi at The University of North Carolina, a Master Mason, a member of the Junior Order of United American Mechanics, a vestryman of Grace Episcopal Church in Morganton, and a Republican.