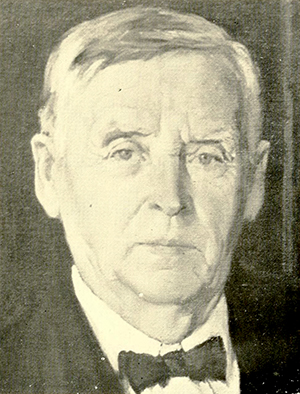 George Washington Paschal, classical philologist, educator, and historian, was born on a farm near Siler City, the son of Richard Bray and Matilda Schmidt Paschal. His father was sheriff of Chatham County during the Civil War. His great-great-grandfather, Henry Bray, was one of the Regulators who brought charges against Edmund Fanning for collecting illegal fees for registering deeds. Paschal's identical twin brother, Robert Lee, was a prominent educator in Forth Worth, Tex.

George Paschal received most of his early instruction from his sister. The reopening in 1881 of Mount Vernon Springs Academy, which was within walking distance of his home, made a more formal education possible. He attended the academy five months out of the year for four years, working on the farm the remainder of the time. He was graduated in 1886. Lacking money for college, Paschal worked three years in Greensboro before entering Wake Forest College in 1889. It was while he was editor of the Wake Forest Student, a literary magazine that his writing ability became evident. The A.B. degree was conferred in 1892.

That fall Paschal entered the University of Chicago for graduate study and after completing the residence requirements for the Ph.D. returned to Wake Forest in 1896 as assistant professor of Latin and Greek. He was a Fellow in Greek at Chicago during the year 1899–1900 and received his doctoral degree at the end of the year. In 1900 Paschal was named associate professor of Latin and Greek at Wake Forest and in 1911 he became a full professor. From 1927 until his retirement in 1940 he was a professor of Greek. For several years he taught Greek at the University of Chicago's summer sessions.

Although teaching the classics was his principal responsibility, Paschal served Wake Forest in many other ways as well. At various times he taught courses in English, history, and mathematics. From 1901 to 1919 he was curator of the library, and during much of that period he was "Collector for the College," writing letters to and visiting those who owed money to the institution. Early in the century he began serving as the admissions examiner and as the college's first registrar, a position he held until 1926. For many years he was director of athletics, personally bearing complete financial responsibility for the teams. His interest in intercollegiate sports never waned.

Soon after completing his doctoral dissertation, Paschal became contributing editor of the State Democrat, a newspaper published in Raleigh. From 1912 to 1920 he was contributing editor of the State Journal, another Raleigh paper, and during World War I his front-page summary of the war news was a regular feature. From 1931 to 1940 he was editorial writer for the Biblical Recorder, a Baptist weekly published in Raleigh, and contributed 8,000 words of copy per week in addition to all the editorials. From 1938 to 1939 he was acting editor. At various times Paschal also contributed articles to the North Carolina Historical Review, Encyclopedia Britannica, Review and Expositor, and Baptist Quarterly Review.

Widely recognized as the premier historian of North Carolina Baptists, Paschal was the author of A History of North Carolina Baptists (vol. 1, 1930; vol. 2, 1955) and A History of Wake Forest College (vol. 1, 1935; vols. 2–3, 1943). He also wrote A Study of Quintus of Smyrna (1904), A History of Printing in North Carolina (1946), which emphasized the Edwards and Broughton Company, and an unpublished manuscript for a three-volume history of the Foreign Mission Board of the Southern Baptist Convention. He was coeditor with E. E. Folk of A Young Man's Visions—An Old Man's Dreams (1956), the poems of Benjamin F. Sledd.

For many years Paschal was a member of the Advisory Committee on Historical Markers for the State Department of Archives and History. In 1932 he was president of the State Literary and Historical Association. He also served as a trustee of Chowan College, a vice-president of the Baptist State Convention of North Carolina, and a member of the Historical Commission of the Southern Baptist Convention, the board of the State Hospital at Goldsboro, and the council of the town of Wake Forest. Paschal was a member of the American Philological Association, Phi Beta Kappa, and the Democratic party. He was a deacon in the Wake Forest Baptist Church.

On 21 Dec. 1905 Paschal married, in Dillon, S.C., Laura Allen, a graduate of Greenville Woman's College and the daughter of Joel I. Allen of Marion County, S.C. The Paschals' ten children, all of whom earned at least one degree from Wake Forest, were Robert Allen, Laura Helen, Catherine, Paul Shorey, and Harry Edward, all of whom remained in Wake Forest; George Washington, Jr., of Raleigh; Richard, of Reidsville; Ruth (Mrs. Emmett S. Lupton), of Alamance; Joel Francis, of Durham; and Mary, of Raleigh. George Paschal was buried in the Wake Forest Cemetery.

Annual of the Baptist State Convention of North Carolina (1958 [portrait]).