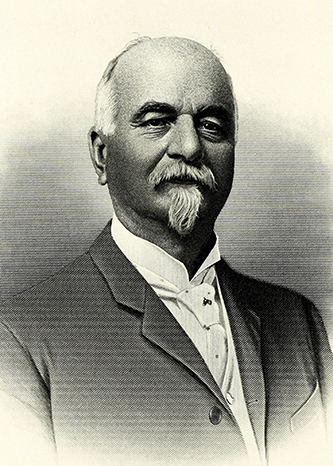 Edward James Parrish, tobacco merchant and manufacturer, pioneering tobacco company executive assigned to Japan, and Durham business and civic leader, was born near Round Hill post office in Orange (now Durham) County, the son of D. C. and R. A. Ward Parrish. He married Rosa Bryan of Haywood, Chatham County on 5 Oct. 1870. They had one daughter, Lily Virginia.

Parrish figured prominently in the enterprises that established a major tobacco marketing and manufacturing center in Durham during the 1870s and 1880s. He was reared on a farm and served with the Confederate army during the last six months of the Civil War. His first occupations after the war were those of a petty merchant and state government worker. In 1871, while operating a grocery and confectionery store in Durham, he became a part-time auctioneer in the first tobacco warehouse to be opened in that city. Two years later he formed a partnership with J. E. Lyons to acquire a warehouse and to become a full-time tobacco merchant. This initial venture proved to be ill-timed, since the panic of 1873 forced the partners to close almost immediately. Parrish in association with various partners persisted, however, opening still other warehouses and building an ever more lucrative tobacco trade over the next decade. In 1886 he acquired a manufacturing plant, producing a tobacco product called "Pride of Durham."

But these were rough-and-tumble years when another Durham firm, W. Duke and Sons, was bowling over competition as it made its way towards the formation of the giant trust known as the American Tobacco Company. In this setting, Parrish suffered misfortunes that destroyed his hopes of building his own tobacco empire. First, his warehouse and other key facilities were destroyed by fire. Then, along with several notables in Durham's business community, he lost heavily in a financial upheaval that was remembered locally as "Black Friday." These reverses in no way tarnished Parrish's reputation as an able tobacco man, and he was able to continue his operations for a number of years. Yet he appears to have incurred debts that made him receptive to an offer tendered in 1899 by the American Tobacco Company. For an annual salary of $15,000 he was to go to Japan where, as vice-president of Murai Brothers Company, Ltd., he would represent American Tobacco's majority interests in the Japanese firm.

Parrish's job was to preserve the American Tobacco Company's stake in an increasingly valuable Japanese market at a time when nationalist sentiment was demanding an end to foreign intrusions. Sales of American cigarettes had started in Japan under a system whereby the Japanese were prohibited by treaty from assessing more than nominal tariff rates. In 1899, however, Japan was freed from this prohibition and acted promptly to adopt a new tariff structure that promised to give infant Japanese firms a monopoly of the home market. Faced with these potentially ruinous circumstances, the American Tobacco Company found a Japanese firm in need of capital to finance its ambitions to expand into a variety of enterprises, bought enough stock to control the firm, and appointed Parrish to oversee the tobacco operations. In effect, American Tobacco had found a way to circumvent Japan's tariff barrier. To Parrish fell the responsibility of making the company's investment pay.

Under Parrish's direction Murai Brothers augmented its production with a new factory modeled along the lines of one that had recently been completed in Durham. The techniques of modern advertising that had worked so successfully in the United States were transferred to Japan and adapted to the requirements of that market. And care was lavished on the development of a network for the distribution of the Murai Brothers brands. In this work Parrish proved remarkably sensitive to Japanese feelings. Against all advice from others in Japan's foreign business community, for example, he allowed the financial transactions associated with the cigarette trade to be handled solely by native banks. Moreover, though startled by business practices that were quite different from those of Durham, he managed to adapt his ways to the local scene. In short, Parrish seems to have been largely responsible for the manufacturing and sales strategies that effectively defeated Japan's intent of turning the tobacco trade over to its own nationals. Cigarette sales in 1901 realized a net profit of $626,039 on a total capital investment of $5 million, and the figures for the next three years were even more gratifying.

But profits such as those realized by the Murai Brothers and its Japanese competitors did not escape for long the attention of a government that was anxious to expand its revenues. After studying European precedents, Japanese officials indicated a determination to seek the parliament's approval of a government tobacco monopoly. Although elements of Japan's tobacco industry were inclined to oppose the monopoly scheme, Parrish advised his New York office against this line. His prediction was that the government would inevitably win and that opposition would only stir ill will, which would be costly to American Tobacco. New York apparently agreed. In any event, by 1902 James B. Duke had formed a new international combine—the British-American Tobacco Company—and his interests in Asian markets were beginning to focus on China. Thus, from 1902 to 1904 Parrish turned his attention to the liquidation of his company's holdings. He was successful in saving for the company its claim to certain cigarette brand names that were becoming profitable in the China market. Further, while his firm and the Murai Brothers suffered financial loss by the government's takeover, Parrish's negotiating skills seem to have contributed to keeping these in the neighborhood of $350,000. At one point, Parrish had reported, both he and the Murai family had expected to be "skinned alive."

Parrish returned to New York and Durham with praise coming from all quarters. Throughout his stay in Japan his work had been followed closely by James B. Duke, who offered him the choice of a position in New York or another foreign assignment. The Murai family presented him with a $5,000 gift on his departure, and both the American and British ministers to Japan testified to his skills as a negotiator. Perhaps the most unexpected decoration was the Emperor Meiji's award of the Third Order of the Sacred Treasure. Parrish was not tempted, however, to continue in the tobacco trade. At fifty-eight he made his home on a farm near Durham and became active in that city's civic and business community.

As we become increasingly aware of how entwined our own lives are with those beyond America's borders, Parrish's career suggests the role of North Carolina's tobacco industry in the making of an interdependent world.