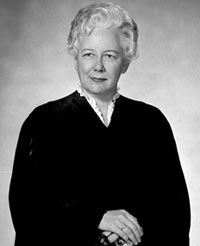 Naomi Elizabeth Morris, lawyer and judge, the daughter of Edward Eugene and Blanche Beatrix Boyce Morris, was born in Spring Hope but the family moved to Wilson when she was a year old. She was graduated from Atlantic Christian College (1943) and from The University of North Carolina Law School (1955), where she was fourth in her class. During World War II she worked for the U.S. Army Signal Corps in Washington, D.C. Before entering law school she was a secretary in a law firm; after receiving her law degree, she joined a firm in Wilson.

In 1967 she was appointed judge of the North Carolina Court of Appeals and the following year she was elected to a full term. Reelected in 1974, she was appointed chief judge of the Court of Appeals, effective 2 Jan. 1979. Naomi Morris was only the second woman in the state to hold such a high judicial position. She retired in December 1982 and returned to her old law firm in Wilson.

During her career Miss Morris received an honorary degree from Atlantic Christian College as well as numerous awards and citations. Active in many state and national professional and political organizations, she was also a trustee of Atlantic Christian College and of the Wilson School of Nursing and a member of the board of associates of Meredith College. A member of the First Baptist Church in Wilson, she was survived by a sister.