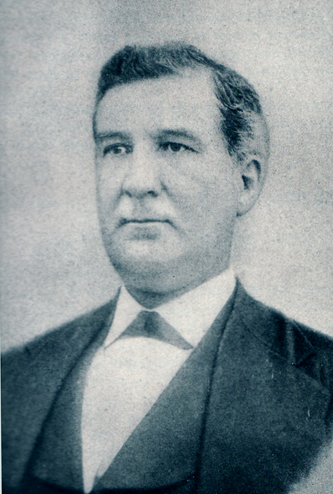 William Armistead Moore, lawyer, judge, and Confederate officer, was the oldest of seven children of Susan Jordan Armistead and Augustus Moore of Edenton; he had four brothers and two sisters. His father, a graduate of The University of North Carolina, was also a lawyer; he was appointed a judge of the superior court in 1848 but resigned the same year. Although a native of North Carolina, William A. Moore is identified as a carpetbagger in several histories of Reconstruction.

After graduating from Edenton Academy, he attended The University of North Carolina from 1848 to 1851. Before he could graduate his father died suddenly, and he returned home to take charge of the estate. Soon afterwards he began to study law. When Moore's eyesight deteriorated, his mother read law books to him. He ranked first in the group examined for admission to the bar by Judge Richmond M. Pearson in 1852.

Moore practiced law until 1861, when he began his short military career. He was colonel and commander of the Fifth Regiment of North Carolina militia, which consisted of four companies of about 200 men. In November 1861 his regiment was ordered to the coast to participate in the defense of Roanoke Island, but it saw no action in February 1862, when Union forces attacked and seized the island. General Henry Wise escaped with 150 men and Moore's militia, which had no arms. His troops helped to block the entrance to the Dismal Swamp Canal, the back door to Norfolk, before Wise sent them home. Encamped at Centre Hill in Chowan County after Roanoke Island had fallen, Moore intercepted a Confederate major and countermanded his orders to burn Edenton because of its Union sentiment. One source indicates that Moore served on General Daniel H. Hill's staff during the Seven Days' Battle near Richmond, that he helped to care for the wounded, and that rheumatism forced him to retire from active service, but no corroborating evidence has been found.

Initially a Democrat, Moore later joined the Republican party. After attending the Democratic National Convention in Baltimore in 1860, his political career progressed slowly. Unpardoned in 1865, he could not vote and took no part in politics. In 1868 the Conservative party placed his name on the executive committee for the First District. Believing the state constitution of 1868 to be a good one, Moore declined the nomination and requested that his name be stricken. Nevertheless, the Conservatives kept his name on the committee and published it across the state, an action Moore considered "an outrage." He firmly believed that the war had settled the issue of states' rights and that his first allegiance was to the United States. Thereafter he affiliated with the Republican party.

During Reconstruction Moore held various public offices. In 1869 he was elected to complete an unfinished term in the North Carolina House of Representatives, then won a seat for a full term (1869–70) and served as speaker for the last two weeks. In April 1871 the governor appointed him a judge of the superior court to complete an unfinished eight-year term. In August 1874 a Republican opponent won this judgeship in a special election called by the legislature, but Moore retained his seat when the state supreme court declared the election unconstitutional.

When the Democratic legislature of 1870–71 assigned a committee to investigate Republican fraud relating to state bonds, Moore came under suspicion. He testified that while he was in New York City in 1869, George W. Swepson had encouraged Tar Heels of both parties to buy North Carolina's special tax bonds on the open market so that their price would rise. Moore had no funds for margin, so Swepson lent him North Carolina railroad bonds for that purpose. When Jay Gould's attempts to corner the gold market led to the panic in September, Moore lost the bonds because his margin was inadequate. No charges were brought against him for this speculation.

Moore died suddenly from paralysis and was buried in St. Paul's churchyard in Edenton. He never married.

Thomas C. Parramore, Cradle of the Colony: The History of Chowan County and Edenton, North Carolina (1967).

Report of the Commission to Investigate Charges of Fraud and Corruption (1872).

John B. Respers, To the People of the Second Judicial District (1874).

The War of the Rebellion: A Compilation of the Official Records of the Union and Confederate Armies, ser. 1, vol. 9 (1899).