Thomas Longworth Moore, Confederate diplomat, was born at Mulberry Grove plantation in Hertford County, the son of Dr. Godwin Cotton and Julia M. Wheeler Moore. His father, a prominent planter and physician, was active in politics and the affairs of the Baptist church. Thomas was a younger brother of historian John Wheeler Moore.

After being educated by private tutors on the family estate, Moore was appointed to the U.S. Naval Academy at Annapolis on 30 Sept. 1857. With the outbreak of the Civil War, however, he resigned from the academy as an acting midshipman on 19 Apr. 1861.

Moore returned to Hertford County for a short time and helped to train troops in Murfreesboro. Entering the Confederate navy as an acting midshipman on 12 June, he served first on the CSRS United States and then aboard the privateer schooner Dixie. In 1862 he became an acting master and was transferred to the CSS Florida. He was later promoted to second lieutenant and then to first lieutenant. 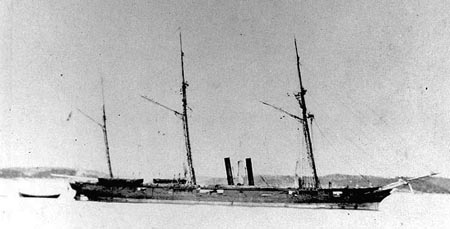 In 1863 Moore was ordered abroad and sailed from Charleston to join the Confederate envoy in Paris as naval attaché. The mission was unsuccessful in its attempts to gain diplomatic recognition of the Confederacy by the French. He remained in Europe and at the end of the war was attached to the staff of Commander James D. Bullock in London. On 27 Aug. 1865, in Baden-Baden, Germany, Moore married Rose Standish Ludlam. Her father, Henry Ludlam, was a wealthy Southern sympathizer who had elected to leave his home in Baltimore and live in Europe during the war.

Returning to the United States, Moore settled in Richmond, Va., where he was employed at the post office. Following the death of his wife, he married Kate Ward on 14 Apr. 1873 at Newport, Ky. In 1877 he was farming at Warrenton, Va., but later moved back to Richmond. Unfortunately, his marriage ended in a scandalous divorce case in which he accused his wife of adultery.

Afterwards Moore left Virginia and became a civil engineer for the city of New York, where he supervised municipal projects for over twenty-five years. His most important achievements were the Croton Dam and Reservoir and the Moore Aqueduct. Retiring because of his advancing age, Moore moved to Portsmouth, Va., to live with his niece. He died there and was buried in neighboring Norfolk.

By his marriage to Kate Ward, he was the father of one son, Godwin Ward, who committed suicide while still in his teens.

The War of the Rebellion: A Compilation of the Official Records of the Union and Confederate Armies, ser. 2, vol. 7 (1899).

Photograph of Mulberry Grove, circa-1920-1940. Image from the State Library of North Carolina.