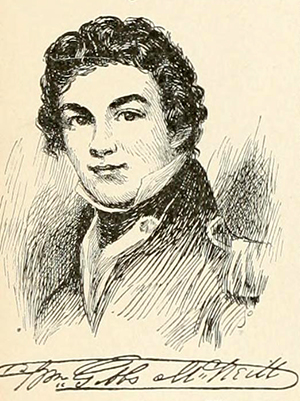 William Gibbs McNeill, civil engineer and army officer, was born in Wilmington of Scottish ancestry; his great-grandfather was a member of a Highland clan that immigrated to North America in 1746. His father, Charles Donald McNeill, after serving in the British army in the West Indies, established the family's permanent residence in Wilmington, N.C. Young McNeill received his early education in Long Island, N.Y. Initially planning on becoming a minister, he became interested in pursuing a career in the military after a visit to West Point. He received an appointment to the U.S. Military Academy and was graduated as a third lieutenant of artillery in 1817. Among his classmates at the academy was George W. Whistler, who married his sister, Anna, and with whom he remained closely associated in several engineering projects during his career. McNeill married Maria Matilda Cammen of New York, and they had seven children.

In 1819 he served in the Florida campaign as an aide-de-camp to Andrew Jackson and later worked with the U.S. Coast Survey in the South under the Corps of Engineers. Early in 1823 he was transferred to the Corps of Topographical Engineers, where he worked on surveys related to a feasibility study for constructing the Chesapeake and Ohio Canal across the Allegheny Mountains. McNeill also worked on surveys for the James River and Kanawha canals, and in 1827 the government loaned him to the Baltimore and Ohio Railroad Company to locate a satisfactory route to the Ohio River. The following year he was appointed to the Board of Engineers and traveled to Europe to study various public works including railroads, which he believed had the most potential as a mode of transportation.

After returning from Europe, he and his brother-in-law, George Whistler, became joint engineers on a large number of new railroads in the East. Besides the Baltimore and Ohio, they worked on such lines as the Baltimore and Susquehanna, the Paterson and Hudson River, the Boston and Providence, the Taunton and New Bedford, the Long Island, the Boston and Albany, and the Charleston, Louisville, and Cincinnati. Becoming the most prominent civil engineers in the nation, they "exercised an influence throughout the country for many years much greater than any others. Indeed there were few works of importance undertaken at that time in connection with which their names do not appear." Their influence was increased by the fact that during this period they directed the early work of the next generation of engineers.

In 1834 McNeill was promoted to brevet major of engineers. However, he resigned from the army in 1817 to become engineer for the state of Georgia, where he was employed primarily on a survey for a railroad from Cincinnati to Charleston. In 1842 he was appointed a major general in the militia of Rhode Island in an effort to quell the Dorr Rebellion in that state, serving until 1845. President John Tyler appointed him the chief engineer of the Brooklyn Naval Yard, for which he prepared the plans for the large dry dock and directed its initial construction before his removal by President James K. Polk following the election. His dismissal was attributed to his involvement in the Dorr Rebellion, as was his failure at the outbreak of the Mexican War to obtain a commission as a brigadier general.

Between 1851 and 1853 he took trips to Europe in efforts to improve his health. While in England, he supported the interests of several large American mining companies and became the first American to be elected to the Institution of Civil Engineers of Great Britain. On a visit to Russia, McNeill was asked to direct the construction of a railroad from St. Petersburg to Moscow but declined. A few days after returning to the United States, he died suddenly in Brooklyn, N.Y.

G. W. Cullum, Biographical Register of the Officers and Graduates of the U.S. Military Academy, vol. 1 (1890).

Arthur May Mowry, The Dorr War or the Constitutional Struggle in Rhode Island (1901).

The National cyclopaedia of American biography, being the history of the United States as illustrated in the lives of the founders, builders, and defenders of the republic, and of the men and women who are doing the work and moulding the thought of the present time Volume 9. New York, J. T. White company. 1899. 48. https://archive.org/stream/nationalcyclopae09newy#page/48/mode/2up