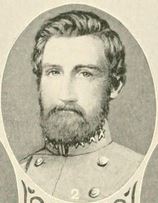 James Hipkins McNeill, Presbyterian clergyman and Confederate officer, was born in Fayetteville, the son of George McNeill. His mother's name is unknown. He attended The University of North Carolina, Yale, and Delaware College (between 1840 and 1844), Union Theological Seminary in New York (1845–47), and the Presbyterian Theological Seminary (1847–48). Licensed by the Fayetteville Presbytery in June 1848, he was ordained in May 1849.

McNeill served the Presbyterian church in Pittsboro from 1848 until 1853, when he became secretary of the American Bible Society and moved to Elizabeth, N.J. At the beginning of the Civil War he returned to North Carolina and from 24 Aug. 1861 to 8 Mar. 1865 was editor of the North Carolina Presbyterian, which his brother George, a graduate of Princeton, had established in 1858 with offices in Fayetteville. In June 1862 he was commissioned captain in Company A, Sixty-third Regiment (Fifth Regiment of Cavalry), but in November he was promoted to major and transferred to the Field and Staff of the regiment. He was wounded in action at Middleburg, Va., in June 1863 and was promoted to colonel to rank from 24 Nov. 1864.

In October 1848 McNeill married Kate Chamberlain of Newark, Del. He was survived by at least one son, George Palmer, and there are numerous McNeill descendants.