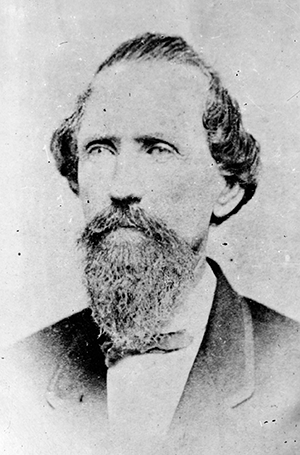 Evander McNair, Confederate general, was born near Laurel Hill in Richmond County, the son of John E. and Nancy Fletcher McNair, natives of Argyllshire, Scotland. Soon after his birth, his parents moved to Mississippi, settling finally in Simpson County. There McNair received an informal education, taught school, and farmed with his father. In 1843 he formed McNair and Company, a mercantile enterprise, in Jacksonville, Miss. He left the firm three years later to join Jefferson Davis's First Mississippi Rifles. During the Mexican War campaigns, he rose in rank from private to orderly sergeant. After the war McNair reentered the mercantile business in Brandon, Miss. In 1856 he moved to Washington, Ark., where he met and married, on 11 Aug. 1859, Hannah Merrill, of Oxford, N.Y., a teacher in the local school for girls.

Although a Whig prior to 1861, McNair enthusiastically entered the Confederate service, raising a battalion of seven infantry companies that became the Fourth Arkansas Infantry. On 17 August he was elected colonel. He and his men fought with Ben McCullough in the fiercely contested Battle of Wilson's Creek in southwestern Missouri in August 1861 and again at Elkhorn Tavern in March 1862. In the latter engagement, Colonel McNair commanded the brigade after McCullough's death on the field. He then crossed the Mississippi River with Sterling Price and joined Kirby Smith's successful campaign in eastern Kentucky. At the Battle of Richmond, in August 1862, McNair performed with distinction and shortly afterwards was commissioned brigadier general. His brigade (consisting of the First and Second Arkansas Dismounted Rifles, the Fourth and Thirteenth Arkansas Infantry regiments, the Fourth Arkansas Infantry Battalion, and Humphrey's battery) contributed significantly to the success of General William J. Hardee's flank attack at Murfreesboro on 31 Dec. 1862. In May 1863 McNair's brigade left the Army of Tennessee and assisted Joseph Johnston in his futile attempts to save General John C. Pemberton in Vicksburg. Recalled to the Army of Tennessee in September, McNair arrived in time for Chickamauga.

One of the two leading brigades in Bushrod Johnson's successful attack against the center of the Union army, McNair's force won the label of "the Star Brigade at Chickamauga." The brigade executed its movements splendidly, although McNair himself fell wounded during the assault. Following Chickamauga, McNair's brigade was shifted back to Mississippi and then to the Trans-Mississippi Department. In a closing campaign, McNair fought under Sterling Price in his "Missouri Raid." In light of his extraordinary competence at Richmond, Murfreesboro, and Chickamauga, Evander McNair's lack of recognition by the Confederate War Department remains a mystery.

After the war McNair returned to Washington, Ark., and then entered the wholesale grocery business in New Orleans. He moved to Magnolia, Miss., before finally settling in Hattiesburg, Miss., where he died. He was buried in Magnolia.