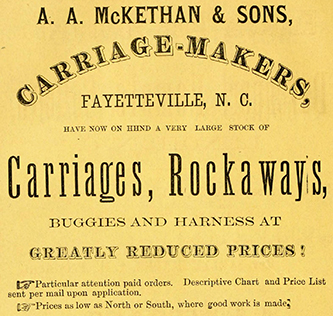 Alfred Augustus McKethan, carriage manufacturer, railroad promoter, and political and civic leader, was born in Cumberland County of Scottish Highland forebears who had settled the region prior to the American Revolution. He was the son of Christian McKethan, the daughter of John and Grisella McAllister McKethan. The name of his father is unknown. Little is known of McKethan's early life and education. In 1832 he began the manufacture of carriages, an enterprise that later made him a prominent figure in the economic and political life of the Cape Fear region.

Antebellum Fayetteville was the center of a large wagon trade in goods brought from Wilmington by steamboat and dispatched overland throughout the Piedmont and mountain regions. Originally, the firm of McKethan and Gardner made wagons and carriages; eventually, McKethan became sole owner and concentrated on carriages. By 1853 he was reputed to be the largest carriage manufacturer in the South, producing a variety of vehicles, including sulkies, gigs, rockaways, buggies, and the more elaborate barouches; orders came from as far away as Kentucky and Texas. In 1866 his sons joined the business, which grew to six buildings, including two smith shops with several forges. The postwar demand for carriages was large from people who had lost every vestige of transportation after General William T. Sherman's march through the Carolinas, and production averaged twelve to fifteen carriages per month.

In addition to maintaining his extensive business interests, McKethan was a perennial leader in local political affairs. In 1847, when the office of town commissioner became elective, he was elected to the board from Ward 5. Continuing to hold this post, he received ninety-four of the ninety-five votes cast in 1860, and he was mayor in 1876–77. During the Civil War he served on important committees concerned with the safety, defense, and relief of the city and people of Fayetteville. In the postwar period he led the effort to redeem local elective government from Reconstruction appointees. In 1870 McKethan and his ticket were elected as the Board of County Commissioners and he became chairman, a position he held for the next decade. Originally a Whig, he had joined the American or Know-Nothing party in the 1850s, but by the time of the Civil War he was a leader in organizing a "Southern Rights" party for the defense of the South. Reconstruction adversities made him a confirmed Democrat. 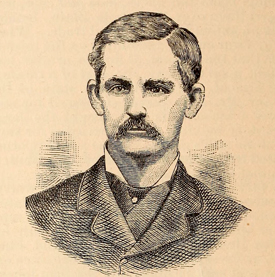 Contemporaries characterized McKethan as a man of industry, integrity, candor, and perseverance. He was "impulsive by disposition, fiery by temperament . . . an active, zealous, whole souled man—in the front rank when any danger was to be met or any responsibility borne." At the same time, "His charity was open, and he gave willing ear and helping hand to tales of woe." His Scottish ancestry made him a staunch Presbyterian.

McKethan died after a brief illness, following a fall resulting in a broken leg, advanced in years and held in high esteem by his fellow citizens. He was buried in Cross Creek Cemetery (No. 2). By proclamation of the mayor, a town meeting was held to pay tribute to him and his contributions to Fayetteville.