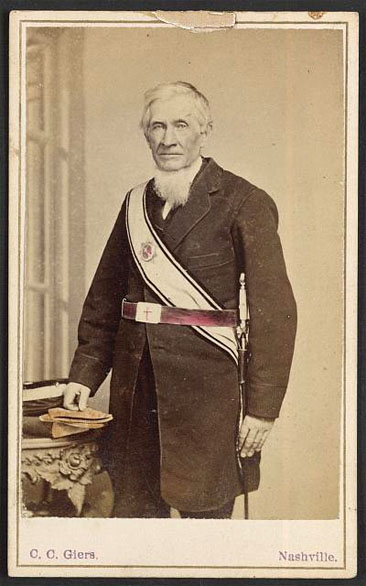 James McCallum, public official, lawyer, and farmer, was born in Robeson County, the son of Daniel and Sarah Smith McCallum. The extent of his education is unknown. On 14 Feb. 1829 he married Elizabeth Brown, and they became the parents of eleven children: an infant son unnamed, Daniel Jerome, Katherine, Mary Elizabeth, James Joseph, Sarah Anne, William Hugh, John Neill, George Burder, another infant who died, and Neill Brown. By the 1820s the McCallum family was living in Pulaski, Tenn., as in 1828 he was recorded as a Master Mason in the lodge there. The 1860 census listed him as the enslaver of twenty-five people and the owner of property valued at $46,000.

McCallum practiced law in Pulaski from 1842 to 1861, and for a time he was also clerk and master of Chancery. Originally a Whig and a Unionist, he became a Secessionist at the time of Tennessee's secession from the Union. In 1861 he was elected to represent Giles County in the General Assembly, and in 1863 he was elected to the Confederate Congress where he served on the committees on Accounts, the Medical Department, and Post Offices and Post Roads. McCallum introduced resolutions advocating government seizure of all vital railroads, the impressment of all gold and silver plate, and the reduction of currency to be followed by a new issue of treasury notes. His voting record suggests that he wanted the Confederacy to use every possible resource in the prosecution of the war.

At the end of the Civil War, McCallum returned to Pulaski. In 1870 he became a director of the Pulaski Savings Bank. He was also a ruling elder of the Presbyterian church, a Sunday school teacher, and superintendent of the Sunday school. His Brief Sketch of the Settlement and Early History of Giles County was published in 1876. He was buried in Maplewood Cemetery, Pulaski.

Thomas B. Alexander and Richard E. Beringer, The Anatomy of the Confederate Congress: A Study of the Influences of Member Characteristics on Legislative Voting Behavior, 1861–1865 (1972).

Journal of the Congress of the Confederate States of America, vol. 7 (1905). https://archive.org/details/journalcongress00deptgoog (accessed August 31, 2014).