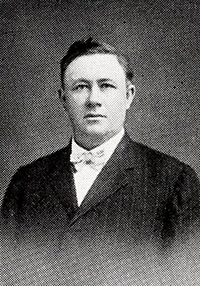 Louis Burgin McBrayer, physician, medical administrator, and pioneer in the fight against tuberculosis, was born near Wolf Top Mountain in Buncombe County, the only child of Adolphus and Lou A. Case McBrayer. He attended Venable School (later Montford School) and Newton Academy, both in Asheville, and Judson College in Hendersonville. In 1889 he received an M.D. degree from Louisville Medical College (now the University of Louisville).

Returning to North Carolina, McBrayer was in general practice in Asheville until 1914. During this period he was elected coroner of Buncombe County for three terms (1901–7) and health officer of Asheville (1910–14). Under his leadership, Asheville set up a model Health Department with a laboratory to curb typhoid. McBrayer was also a surgeon at Asheville's Mission Hospital (1904–14) as well as a surgeon for the Southern Railway (1910–14). From 1908 to 1914 he served as president of the State Board of Medical Examiners.

On 2 Apr. 1914 McBrayer moved to Sanatorium (now McCain) to become superintendent of North Carolina's Sanatorium for the Treatment of Tuberculosis and chief of the Bureau of Tuberculosis of the State Board of Health. He held both positions until 1924, when he moved to Southern Pines. In 1915 he organized the North Carolina Tuberculosis Association and was managing director from 1915 to 1937. He was president of the North Carolina State Medical Society in 1915 and of the Southern Conference on Tuberculosis in 1924–25. In 1921 he became secretary of the Medical Society and served until 1937. McBrayer edited the society's annual Transactions from 1918 to 1937 as well as the section on North Carolina in Southern Medicine and Surgery (1920). He was one of the incorporators of the Hospital Savings Association as a Blue Cross plan in 1935.

McBrayer married Lillian Cordelia (Cordie) Deaver (1867–1921) on 20 July 1890, and they had three children: Reuben Adolphus, Sarah Louise (Sadie Lou) (Mrs. Paul Pressly McCain), and Louis Burgin II. He was a Democrat, a Baptist, and a member of Kiwanis. Also active in the Independent Order of Odd Fellows, he served as chairman of the board of trustees of its home for orphans in Goldsboro and was grand marshall of the Sovereign Lodge in 1933–34. McBrayer was buried in the Bethesda Cemetery, Aberdeen.

"Lewis B. McBrayer, M.D., Asheville." Photograph. One hundred year history of the North Carolina State Board of Medical Examiners, 1859-1959. Raleigh, N.C. : The Board. 1959. 37. Internet Archive. https://archive.org/stream/onehundredyearhi00proc#page/n47/mode/2up