"The Greatest Pilot on Earth" 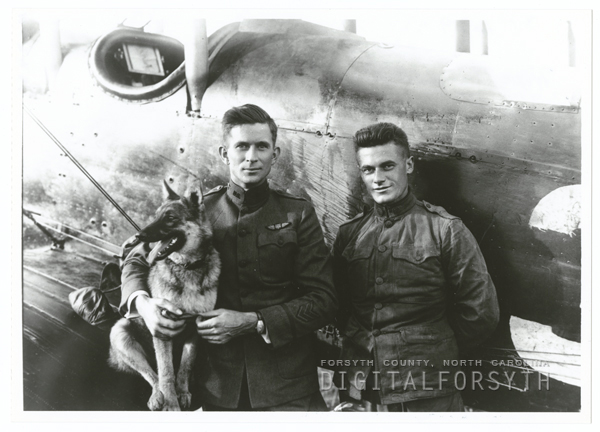 Sampson County’s Belvin Maynard was once known across America as “the greatest pilot on earth.” Towns and clubs begged him for appearances, and honors poured in daily.

Maynard was born in Anson County and grew up on a Sampson County farm. In school he played baseball and was in the band, the debating club, and a singing quartet. At home he became an expert mechanic and kept the farm machinery repaired; he could take a car apart and rebuild it. But he hoped to become a preacher, so in 1913 he went to Wake Forest College for ministerial study. Now having a wife and child, he did odd jobs but soon had to leave school to find better-paying work.

When America entered World War I in 1917, Maynard joined the army and learned to fly, spending the next year testing new planes at a French airfield. The army found him too valuable there to send him to the front lines. Maynard had learned so much about flying many types of aircraft that he had become indispensable in his testing role. When the war ended in late 1918, Maynard, waiting to go home, spent the winter testing airplanes. For recreation he sometimes flew stunts, dazzling big crowds. He even broke a world record by doing 318 loops in sixty-seven minutes.

Returning home the next summer, Maynard was soon back at Wake Forest. But as classes began, he was invited to fly in an air race from Long Island, New York, to Toronto, Canada, and back—a distance of more than one thousand miles, the longest air race ever held. It was billed as “the greatest air race in history.” Maynard would fly a de Havilland biplane. The race took place in October 1919, and he won, beating some of the world’s best flyers.

Newspapers called him the Flying Parson and “the greatest pilot on earth.” In North Carolina, he was a conquering hero. The race showed that airplanes, evolving from the rickety stick-and-cloth machines of prewar days into mankind’s fastest means of travel, would bring huge changes, with Maynard leading the way.

He had resumed classes at Wake Forest when he was invited to participate in another race, one that made the New York–Toronto one seem timid. It would cover some six thousand miles, from Long Island to San Francisco. Its sixty-seven planes would land at certain points for fuel and rest. (Only flying time counted in picking the winner.) With Maynard were his puppy, Trixie (wearing a Snoopy-style scarf), and his mechanic, William Klein. Their de Havilland was named Hello Frisco.

Maynard avoided bumpy cloud banks that forced some planes down early in the race, and he reached San Francisco in first place. After a brief stay, he set off for New York, confident that he would win. But the next day, near Omaha, Nebraska, his motor stopped. He had to land in a rural cornfield. Klein found the camshaft broken. The chance at victory vanished, because the nearest new motor was in Chicago, some five hundred miles east. The motor could not be replaced in time to win the race.

Maynard reviewed his problem and thought of a possible rescue. He had heard in San Francisco that a rival pilot, using the same kind of motor, had crash-landed in Nebraska. If the other downed plane was close enough, and if the motor could still run, it could replace Maynard’s and get him back in the race.

Maynard ran to a farmhouse and called an Omaha army base. He learned that the wreck was eleven miles away and that soldiers were removing the plane’s undamaged motor. He borrowed an army truck and sped to the wreck, telling the workers to rush the motor to his plane. When Maynard returned to Hello Frisco, Klein was removing the broken motor. The new one soon arrived and was installed. Maynard took off at dawn, still with a chance of winning. Two days later, he did.

Maynard, still in the army, was the toast of America. He was celebrated at a New York City parade. He was recommended for promotion and other honors. Newspapers were full of praise, and the Smithsonian Institution in Washington, D.C., displayed a replica of Hello Frisco. Tar Heels were thrilled.

Maynard’s fame as “the greatest pilot on earth” lasted just a month. In a November talk to an antiliquor group, he said that some pilots in the recent race had been drunk. The army insisted that the racers had been checked at all stops, and that none were intoxicated. There was talk of court-martialing Maynard. By Christmas his reputation was ruined. He left the army and began stunt flying. In a Vermont air show in 1922, he crashed and died, bringing a tragic end to a grand career.

Dr. Thomas C. Parramore, a professor emeritus of history from Meredith College in Raleigh, wrote the book First to Fly: North Carolina and the Beginnings of Aviation, published in 2002 by the University of North Carolina Press.

1910. "Belvin [Womble] Maynard, at center, with his dog 'Trixie,' and his mechanic William Kline. Online at http://www.digitalforsyth.org/photos/6550.