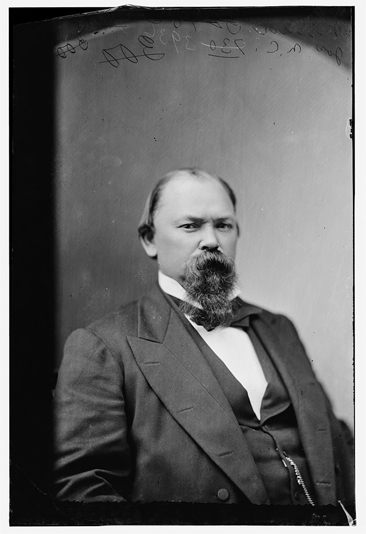 Joseph John Martin, lawyer and congressman, was born in Williamston, the son of Wheeler and Caroline Watts Martin. Educated at Williamston Academy, he made his first public move in 1856, when he and a friend, Augustus Moore, bought a Williamston newspaper, the Young American. They changed its name to the Democratic Banner, the first issue appearing on 7 Aug. 1856. The paper was plagued with problems and publication was suspended during the latter part of 1859. In the same year Martin, having studied law under Judge Richmond Pearson, was admitted to the bar and began his practice. The 1860 census records his occupation as lawyer. He made a good impression locally and was appointed prosecuting attorney for Martin County.

There is some question as to whether he was the Joseph J. Martin of Martin County who enlisted as a private in Company G, Seventeenth Regiment, on 10 May 1861. One of this name was captured at Fort Hatteras in August and confined in prison at Fort Columbus, New York Harbor, and at Fort Warren, Boston Harbor, but paroled in late January 1862. Returning to his company, he served until 20 Mar. 1862, when the company was disbanded. In October he joined Company E of the same regiment and served until October 1864. (The question arises because in the latter position he once was described as aged forty-one; if the age were thirty-one, there would be no question.)

In 1868, when he was registered as a Republican, Martin was elected solicitor for the Second Judicial District. Reelected in 1874, he represented North Carolina in the Republican National Convention at Cincinnati in 1876. Resigning his position as solicitor in 1878, he ran for Congress. He was closely associated with the post–Civil War federal and military authorities, and this is said to have been significant in his election despite suspicions of corrupt vote gathering and tallying by local officials. He served in the Forty-sixth Congress from 4 May 1879 to 29 Jan. 1881, when his election was successfully contested by Jesse J. Yeates.

Congressional records suggest that Martin spent much of his time in the House of Representatives arguing the validity of his election. At the beginning of his term, however, he was appointed to the Select Committee to Inquire into the Causes of the Present Depression of Labor. His accomplishments were limited primarily to presenting legislation for pensions and relief for selected individuals who had been adversely affected by the Civil War. In addition, Martin introduced legislation to establish a national mail steamship service but had to step down before the measure received final action.

Returning to North Carolina, Martin moved from Williamston to Tarboro, where he resumed his law practice. He served as an active trustee of Williamston Academy during the period 1881–82. In 1897 he was appointed postmaster for Tarboro and served until his death three years later. He was survived by his wife, the former Victoria Fagan; four sons, Wheeler, Joseph John, Jr., John W., and John F.; and a daughter, Fannie. He was buried in the Williamston cemetery.