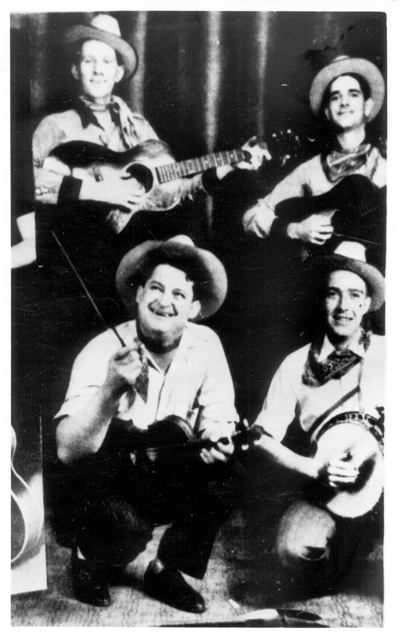 James Emmitt Mainer, country musician, was born in Weaverville, the son of Joseph and Polly Arwood Mainer. When he was five the family moved to Glendale, S.C., and he soon began to work in the cotton mill with the rest of the family. At age thirteen Mainer wrote "Hard Times in a Cotton Mill," a song that later became a popular recording. At fifteen the lad hopped a freight train and went to Knoxville, Tenn. There he worked for two years in a mill until he and his brother, Wade, moved to Concord, N.C. Both young men were musically talented, Emmitt having begun to play the banjo at the age of nine. Although the brothers both worked in a cotton mill, they began to spend their evenings with others who were interested in music. Soon a group was formed and known as J. E. Mainer and His Mountaineers. The nucleus of this group, and others with which he was later associated, consisted of the fiddle, banjo, and guitar. The Mountaineers began to travel around the state to play.

Beginning in 1932 Mainer's Mountaineers played on a noontime radio program broadcast over station WBT in Charlotte. Sponsored by the Crazy Water Crystal Company, the show continued for four years; in the summer at noon, when doors and windows were open in the heat, the Mountaineers could be heard from house to house by anyone walking along the city sidewalk in central North Carolina.

In 1935 Mainer produced his first recording for the RCA Victor Recording Company; he eventually recorded over two hundred numbers for RCA Victor. Mainer's Mountaineers later had a radio show on station WPTF in Raleigh and for a brief time also were on WWL in New Orleans. In 1941 they were invited to the White House to play and have refreshments with President and Mrs. Franklin D. Roosevelt. Enjoying a national reputation, they made guest appearances on nearly two hundred radio stations, broadcasting in both Carolinas, Virginia, Georgia, Alabama, Louisiana, Texas, Illinois, Tennessee, Kentucky, Ohio, and Mexico. They also played at the University of California at Berkeley in 1963.

Mainer, who was named to the Country Music Hall of Fame in 1969, was sometimes referred to as the "number-one fiddler in the nation." He was recognized for such hit songs as "Maple on the Hill," "Hard Times in a Cotton Mill," and "Mother's Not Dead, She's Only Sleeping."

Mainer married Sadie McDaniel. He died of a heart attack at his home in Concord just before leaving for a country music show in Virginia. A member of Poplar Grove Baptist Church, he was buried in Carolina Memorial Park, Concord. He was survived by his wife and eight children: Carolyn Wilson, Mrs. May Jarvis, Mrs. Irene Teassner, J. E., Jr., Charles, Earl, Glenn, and Earl Wayne—the latter an adopted son.