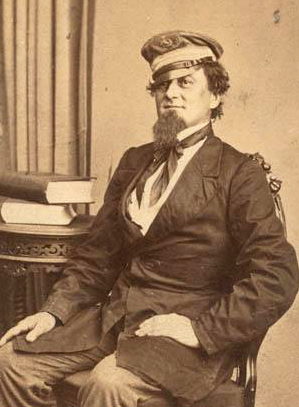 John Newland Maffitt, Confederate navy captain and blockade-runner, was born at sea, the son of Ann Carnic and the Reverend John Newland Maffitt. His father was graduated from Trinity College in Ireland and became a Methodist missionary and preacher. His sermons drew large crowds and as a result of his popularity, he was elected chaplain to the U.S. House of Representatives in 1841.

Young Maffitt lived in Connecticut until, at age five, he was adopted by his uncle, Dr. William Maffitt of Ellerslie near Fayetteville, N.C. At an early age he demonstrated leadership in sports. After attending school in Fayetteville, the nine-year-old continued his education in White Plains, N.Y. Three days after his thirteenth birthday he was commissioned a midshipman in the U.S. Navy. Following a cruise on the sloop-of-war St. Louis, he spent three years in the Mediterranean aboard the Constitution, a frigate, about which he later wrote a novel, Nautilus; or, Cruising under Canvas (1871). In 1838, after a thorough oral examination, he was promoted to passed midshipman, and three years later he became acting master of the frigate Macedonian.

In 1842 Lieutenant Maffitt was ordered to the U.S. Coast Survey. He spent more than fourteen years in hydrographic operations—mapping, graphing, charting, making soundings to determine water depths, plotting the location of shoals, determining the set or direction and velocity of currents, recording tidal observations, taking bottom and water specimens, and recommending the placement of buoys, lights, and lighthouses. The superintendent of the Coast Survey, Professor A. D. Bache, reported that Maffitt "as a surveying officer has not been excelled by any one with whom I have come in contact."

Unexpectedly, in 1857 Maffitt was called for a hearing by the navy "Retiring Board" concerning his professional fitness. Prior to the inquiry he received an apologetic and complimentary letter from Secretary of the Navy J. C. Dobbin, and during the proceedings a number of naval officers acknowledged his professional ability. After the hearing Maffitt was restored to active duty and placed in command of the brig Dolphin. Ordered to capture pirates and slaves, he became the first American officer to capture a slaver with its cargo.

In 1861 Maffitt resigned from the navy in order to join the Confederacy, thereby sacrificing property he owned in the North. President Jefferson Davis appointed him a lieutenant in the Confederate navy, where he enjoyed temporary duty as a naval aide to General Robert E. Lee while preparations for the defense of Savannah were in progress. In early 1862 Maffitt was ordered to the steamer Cecile to run the blockade with supplies for the Confederacy. Because privately owned blockade-runners were not dependable in supplying munitions for the Confederacy, the Davis administration employed Maffitt as the first of several naval officers to obtain vital supplies.

For a short period he commanded the Nassau (formerly the Gordon) and later the iron-screw steam cruiser, the Florida, which had been built in Liverpool. The crew of the Florida experienced an epidemic of yellow fever in which Maffitt's stepson, John Laurens Read, died. In order to rebuild his sickly crew and refit the cruiser (by this time her guns were inoperable), Captain Maffitt entered the port of Mobile by running the blockade in daylight. The bombardment from the blockaders was severe. According to Maffitt, "We had about 1,400 shrapnel shot to our hull, and our masts were pitted like a case of smallpox." The damage was so great that he did not return to sea for over three months. To prevent his escape, the Federal navy increased the blockading force near Mobile. Maffitt waited for a violent storm before setting out and used trickery to lose six pursuing blockaders. For his ingenuity, he received a letter of approbation from S. R. Mallory, secretary of the Confederate navy. Yankee Admiral David Dixon Porter, author of The Naval History of the Civil War, stated: "During the whole war there was not a more exciting adventure than this escape of the Florida into Mobile Bay."

Early in 1863 Maffitt was promoted to the rank of commander in the Confederate navy "for gallant and meritorious conduct in command of the steam sloop Florida." Due to impaired health as a result of yellow fever, he requested detachment from the vessel in September 1863. After several months' recuperation, he returned to active duty as commander of the Lilian.

During his service to the Confederacy, Maffitt repeatedly ran the blockade to carry needed supplies and captured and destroyed more than seventy prizes worth an estimated $10 million to $15 million. In 1863 the Royal Gazette of Hamilton, Bermuda, reported that "the ship Benj. Hoxie, of Mystic, Conn., about 1300 tons burthen . . . laden with logwood, hides, 30 tons of silver ore and about $500,000 in bars of silver and $7000 to $8000 in gold became a prize of the Florida."

In the summer of 1864 Maffitt was commander of the gunboat Albemarle at Plymouth. After southern ports were captured, he refused to surrender his ship to the United States; instead, he followed his orders and returned his steamer, the Owl, to agents in Britain. He chose to remain in England, and after passing the British naval examination, he served for approximately two years in command of the British merchant steamer Widgeon running between Liverpool and South America. Then returning to America, he settled on a farm near Wilmington by 1868.

Maffitt was married three times. On 17 Nov. 1840, at age twenty-one, he married Mary Florence Murrell in Mobile, Ala. Their children included Mary Florence (Florie) Maffitt Wright and Eugene Anderson. The cause of the end of this marriage is undetermined. On 3 Aug. 1852, at St. Paul's Church in Charleston, S.C., he married Mrs. Caroline Laurens Read, a widow with three children. They became the parents of John Laurens and Colden Rhind, who was named for a longtime navy friend. His second wife died in 1859. The third marriage was to Emma Martin and took place in the bride's home in Wilmington, N.C., on 23 Nov. 1870. They lived on his farm, The Moorings, located on the sound at Wrightsville Beach, and together worked on Nautilus; or, Cruising under Canvas and some magazine articles. There were three children by this marriage: Mary Read Maffitt Borden, Clarence Dudley, and Robert Strange.

Maffitt died of Bright's disease and was buried in Oakdale Cemetery, Wilmington. He had been the only officer of the grossly outnumbered Confederate navy who had successfully engaged in both commerce raiding and blockade-running.

Charles C. Beamun, Jr., The National and Private "Alabama Claims" and Their "Final and Amicable Settlement" (1871).

Edward Boykin, Sea Devil of the Confederacy: The Story of the Florida and Her Captain, John Newland Maffitt (1959).

Moses Elsemore, An Impartial Account of the Life of the Rev. John N. Maffitt (1848).

David Dixon Porter, The Naval History of the Civil War (1886).

Duncan Rose, The Romantic Career of a Naval Officer, Federal and Confederate: Captain Maffitt of the C.S.S. Florida (1935).

The person you see here is,

The person you see here is, for real, is my Great Grandfather who live in Wilmington, N.C as I also live here. I tell the story of him. There is also a chart you can recieve, for framing, of the Cape Fear River, free, done in 1853 for your wall to hang plus the story how he did it by NOAA. My name is Robert Maffitt People believe and think he was the Real Rhett Butler.
Robert Maffitt

Looking for chart he s my

Maffitt was responsible for

Maffitt was responsible for stopping slave ships before the Civil War began. He struck fear in the heart of the illegal slave trade.