John MacDowell, Anglican missionary, was licensed on 8 Aug. 1753 by the bishop of London to serve in the colony of North Carolina and to receive the king's bounty of twenty pounds for travel expenses. In January 1754 MacDowell became rector of St. James's Parish, Wilmington, where he served until May 1757. For the next year he had charge of both St. James's and St. Philip's Parish in Brunswick. In addition to his work in these parishes, he held occasional services at St. John's, Onslow; St. Gabriel's, Duplin; and St. Martin's, Bladen. Traveling on horseback through swamps and wilderness to minister to these scattered missions, he underwent many hardships for which he was poorly compensated. On 5 June 1758 he resigned his work in Wilmington to be rector of St. Philip's, Brunswick, but continued to hold occasional services in the neighboring counties. 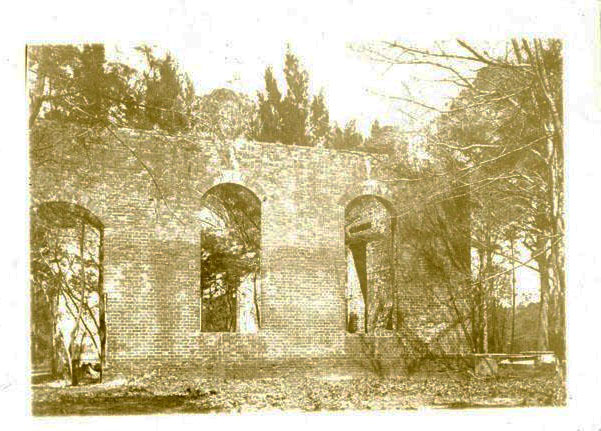 n April 1760 the members of St. Philip's vestry wrote to the Society for the Propagation of the Gospel in Foreign Parts requesting that MacDowell be appointed to their parish as a missionary of the society. They noted that since coming to St. Philip's, he had "always behaved himself as became a worthy Minister of Jesus Christ." Further, MacDowell had been "very well liked by all the Vestries of every Parish, where he hath officiated." Governor Arthur Dobbs also urged the society to make MacDowell one of its missionaries, as St. Philip's parish was unable to support a minister on its own. He went on to say that the parish had gone to great expense to erect a church that, when completed, would be the largest in the province. The king had given St. Philip's its communion silver, a Bible, and prayer books. Dobbs proposed to make it "his majesty's chapel in this government."

Less than a year later MacDowell complained that he was overworked and underpaid by his vestry. Following the death of his wife in November 1760, the vestry had reduced his salary on the grounds that his expenses were less. In July 1761 he wrote the Society for the Propagation of the Gospel that he had been forced to sell three of his slaves "for the discharge of debts contracted by last years sickness Death & misfortunes in my family." At this time he was so despondent about his health that he petitioned the society to care for his infant son in the event of his death in North Carolina. Six months later he wrote to the Moravians at Wachovia asking them to do the same if the society rejected his request. One of his problems was solved in June 1762, when he received an official appointment as a missionary of the society, but his health steadily declined.

In hopes of improving his health, MacDowell went to Wachovia in the summer of 1763 to place himself under the care of a Moravian doctor. MacDowell remarked that "among the Gentry of this land it is the fashion to visit the Moravian towns." During his two-month stay he preached once in the Moravian church and baptized 150 children of English parents in the area. In spite of the kind attention of the Moravian doctor, MacDowell's condition did not improve. When he left Wachovia he was "too weak to ride, so was borne in a two-horse litter, led by his negro." Several weeks after returning to Brunswick he died of "chronic diarrhoea." He was buried in the churchyard of St. Philip's Parish beside his wife.

MacDowell married Sarah Grange of the Lower Cape Fear section. They had one child, John Baptist.