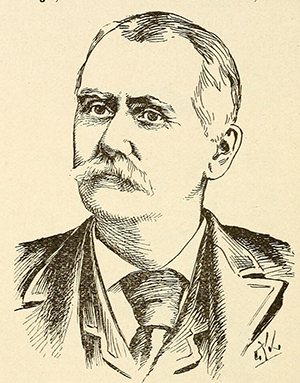 Edward Francis Lovill, Confederate officer, attorney, legislator, and Indian agent, was born near Siloam, Surry County, the son of William R. and Eliza J. Reeves Lovill. His great-grandfather, Edward, who used the spelling Lovell, came to North Carolina from Cornwall, England, and was a pioneer in the iron industry in the Surry County region.

Educated locally and at an academy at East Bend, Yadkin County, young Lovill—then nineteen—enlisted as a private in Company A, Twenty-eighth Regiment, North Carolina Troops, on 4 May 1861 and was elected second lieutenant on 4 October. Soon after his promotion to captain on 9 Apr. 1862, he was given command of the company. In the absence of the colonel at the Battle of Chancellorsville, Lovill commanded the regiment; as senior officer, he also commanded on other occasions. In March 1865 he was recommended for promotion to colonel, but the war ended before this appointment was approved. In combat Lovill was wounded on three occasions, most seriously at Gettysburg in July 1863 and near Petersburg in September 1864, returning to duty after periods of recuperation. He was present when General Robert E. Lee surrendered at Appomattox Court House on 9 Apr. 1865.

After recovering at home from his wartime injuries, Lovill married Josephine L. Marion and moved to Warrensburg, Mo. From this base he farmed for a time and briefly worked as a cowboy in Texas. In 1874 Lovill returned to North Carolina and settled in Boone, where he established a mercantile business, began a career of public service, and studied law. Elected to the General Assembly, he served in the senate in 1883 and in the house in 1885. In the latter year, he was admitted to the bar and soon developed a distinguished practice in Boone. It was during the 1885 session as well that Lovill secured the passage of a bill that led to the creation of what is now Appalachian State University. He was again elected to the house in 1893 and to the senate for terms in 1907–8 and 1919–20. During his final term he had the distinction of being the last Confederate veteran to serve in the North Carolina General Assembly, and it has often been observed that he was among the minority of legislators who supported woman suffrage.

Among Lovill's other public services he was for a time director of the Masonic Orphanage at Oxford by appointment of Governor Charles B. Aycock. As commissioner to the Chippewa Indians (1893–97), by appointment of President Grover Cleveland, he was involved in classifying lands ceded by the Indians to the U.S. government. For many years Lovill was chairman of the board of trustees of the Appalachian Training School, where a building on the campus now bears his name. As a community leader, he was responsible for the establishment of a tobacco warehouse in Boone.

A Methodist and a Mason, Lovill was the father of four children, including a son, William R., who practiced law with him.