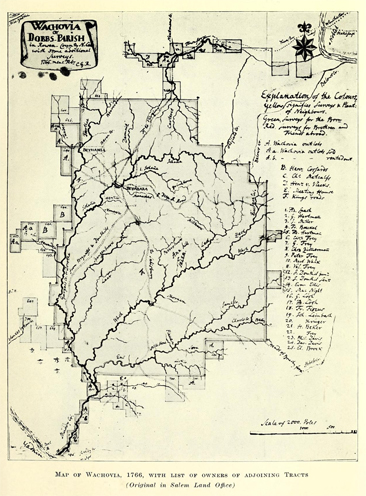 Jacob Loesch, one of the Moravian settlers of Wachovia and the first Vorsteher (manager) of Bethabara (now Old Town), was born near Schoharie, N. Y., the son of George and Anna Loesch. At age twenty-two, fully trained as a cabinetmaker, Loesch went to Bethlehem, Pa., and was accepted into the Moravian congregation. He was assigned to the position of Vorsteher for the outlying farming community of Christiansbrunn. Loesch must have proved himself a good business manager and organizer because in 1752 he, together with fourteen other single men, was chosen to settle the Wachovia tract in North Carolina that had been purchased by the Moravians from Earl Granville of England. The town the men carved out of the wilderness was called Bethabara, the first Moravian town to be established in the colony.

On arriving in North Carolina, Loesch familiarized himself with the laws of the province so that he could guide the Brethren accordingly. As Vorsteher of the town, Loesch was responsible for their legal and business affairs. He filled many required legal positions for the colony while he was also the primary representative of the Moravian people. To appease the authorities in regard to the religious requirements of each county, Loesch served as "Church Warden" from his area. This title was merely a formality for the Moravian congregation in a government organized under the Anglican church.

In Bethabara from 1753 to 1768, Loesch performed a host of duties including surveying, road planning, farming, mediating disputes, representing the town in business and legal matters, and helping to establish the town of Salem a few miles away. He also traveled throughout the South establishing trade relationships with various communities and occasionally conducted religious services in Bethabara.

As the town became established, the obligations of every individual increased. Loesch was designated Farm Vorsteher in 1756. The next year, during the French and Indian uprisings, he was commissioned captain of an independent company of militia for the inhabitants of Dobbs Parish in Rowan County. This was a strictly defensive force to protect the nearby settlers from the sporadic Indian attacks. In 1758 Loesch qualified as a justice of the peace under North Carolina law. By 1759 Bethabara was a thriving town and the job of managing it was too big for one person alone. This prompted the Brethren to organize a Committee of Outward Affairs, allowing Loesch to travel more frequently as the town's representative. In the same year, while attending the Assembly in Wilmington, he impressed the governor and other representatives with his descriptions of the Moravian community system. In 1767 Loesch had the honor of hosting Governor William Tryon in Bethabara.

Late in 1768 the Moravian Oeconomie Conference in Pennsylvania recalled Loesch to serve as Vorsteher and justice of the peace in Nazareth, Pa. Reluctantly, but dutifully, he and his family left North Carolina in April 1769; he had contributed fifteen years of energy and enthusiasm to the establishment of both Bethabara and Salem. Loesch's sensible and skillful leadership was a major factor in the success of the Moravian venture in North Carolina.

Loesch died after falling from his horse while traveling to Hope, N. J. He was survived by his wife, Anna Blum, whom he had married in 1757, and five children, Jacob (who adopted the spelling Lash for his surname), Johann Christian, Anna Philippina, Abraham, and Susanna Catharina Elizabeth, most of whom eventually returned to North Carolina to serve its Moravian congregation.