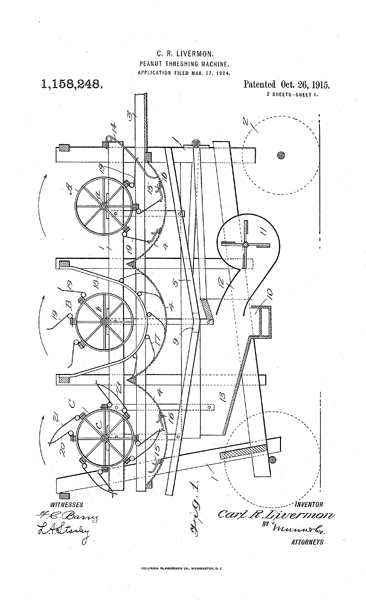 Carl Raby Livermon, inventor, was born at his parents' home in Roxobel, with his maternal great uncle, Dr. Preston C. Jenkins, in attendance. He was the son of Asa Thomas (1847–1929), a Roxobel merchant-planter, and Alberta Raby Livermon (1856–1947). He had one sister, Ruby, who married J. M. Jacobs, D.D.S. (1869–1954), in 1903. Livermon studied in Roxobel under a Mr. Kennedy, a teacher from Scotland whom the townspeople had hired. He attended boarding schools in Scotland Neck and Windsor, Va., before entering Wake Forest College.

After he left Wake Forest, his father set him up in a business that failed to prosper. One fall he persuaded his father to allow him to operate his peanut picker for hire. Although this project was financially successful, Livermon decided that there was too much time wasted on breakdowns. Consequently, he started studying the problems involved and thinking of ways to correct them. The internal chains seemed to be the major trouble, so he designed a machine that had only two chains.

In 1915, after nine years of thought and study in his spare time, while operating an automobile partnership with J. T. Cullifer, and three more years of testing, the P-Picker Company of Roxobel advertised The Samson. Munn and Company, patent attorneys of Washington, D.C., had filed the patent for this machine on 16 Feb. 1912, and the patent had been granted on 21 December. Other improvement patents were issued starting in 1915. Several years later, Livermon perfected a cylinder machine that was widely copied thereafter. This picker, the Livermon Peanut Machine, was manufactured for Livermon by the A. B. Farquhar Company of York, Pa., and was sold throughout the U.S. peanut belt (through dealerships set up in Alabama, Georgia, Florida, Louisiana, Tennessee, North Carolina, and Virginia) as well as in South Africa. Sales and distribution of the machine were handled in Roxobel under Livermon's direction from the Carl R. Livermon Company office, management of which he entrusted to his sister Ruby Livermon Jacobs.

On 2 Jan. 1937 Livermon married Annie Julia Norfleet, the daughter of Thomas S. Norfleet and the late Lelia Powell Norfleet of Roxobel. They returned from their honeymoon to his paternal home where he resided all his life.

Livermon did not let his inventive genius rest after creating his successful peanut machine. Later he invented and patented a self-feeder to increase the machine's efficiency. Other patents were issued to him for a target-throwing device, whose patent he sold in 1949; a ledger-holding device; wheel starters for aircraft landing wheels; and a three-wheel amphibious boat trailer that was rolled into the water and from which the boat was floated after the trailer had been anchored.

The name and goodwill of the Livermon Peanut Machine and self-feeder were purchased by the A. B. Farquhar Company in 1949. After this sale and before he decided to retire, Livermon maintained his Roxobel office for a few years in order to merchandise the L & J Boat Trailer. His other inventions, for which he did not seek patents, included a two-lever cart for hauling peanut stacks to the picker, a device that was widely copied in the industry; retractable wheels used under a rocking chair for moving infirm people from room to room without disturbing them; a central air-cooling device for his office in Roxobel; and a folding (to save space) wheelbarrow for carrying heavy luggage from the garage to his beach house in Nags Head.

After closing his office in 1951, Livermon devoted his time to his and his sister's farming interests and to his civic activities. Foremost among the latter was the operation of the Roanoke-Chowan Bank, where he served as a director from 16 Jan. 1918 to the day of his death—a period of fifty years. Livermon was buried in the Roxobel-Kelford Cemetery, Roxobel, in the plot with his father, mother, and paternal grandparents, Cader Monroe Raby (1827–92) and Mary Frances Jenkins Raby (1838–1924).