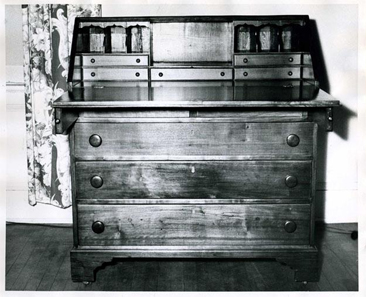 William Little, cabinetmaker and planter, was born at Mallsgate, Stapleton Parish, Cumberland County, England, the son of John and Jane Phillips Little. His parents and their family were living at the time with John's brother George Little at his freehold messuage, Mallsgate (literally "gate to the Mall"), which he purchased in 1748. George listed himself, as did kin at "Mallsburn" (Mallsbrook) and "Mallshill," as a yeoman or farmer. Before his death in 1783, he willed the property to his wife and nephew George (son of John) jointly. Later this George helped his brother William to be apprenticed to a cabinetmaker named Graham; Graham's first name and location and the date of William's apprenticeship are unknown.

In 1798 "Brother George" helped William go to America where the latter worked with John Watson at Kingstrail, No. 12, in Charleston, S.C. About 1801 Little moved to Sneedsborough, N.C., a thriving, fashionable town where he bought a number of lots and built a home and a store. His known furniture is owned mostly by descendants and other relations. He made some pieces for Adam Lockhart and Robert Troy, of Wadesboro, both members of the state legislature (Troy was also solicitor general); Hugh McKenzie, postmaster and merchant of Sneedsborough; Judge Samuel Wild of Columbia, S.C.; and William Little's father-in-law, Robert Johnson Steele. Some of his furniture was of the Sheraton and Hepplewhite styles. A few pieces show Chippendale influence, and the latest were an Empire sideboard and bed. The woods were walnut, cherry, and mahogany, with local woods for secondary use.

In 1801 Little married Elizabeth Steele, and they became the parents of eleven children. Robert Johnson Steele, her father, who was from the vicinity of Carlisle, took out many land grants in Anson, Montgomery, and Richmond counties. He also acquired property in Kentucky. William went there in 1808 to see some of Steele's holdings, but no record shows that he bought any of it. Elizabeth's father gave land to her and sold some to them jointly. William, who had bought land of his own and, in the custom of the time, had control of his wife's, became a large landowner.

In 1815 Little built a home on Jones Creek near Wadesboro in Anson County. In his will he mentioned crops, not only from the Jones Creek plantation but also from "all my land on my Brown Creek plantation," and other property including a tannery in Wadesboro. He sent for one of his nephews in England to run the tannery. His will mentions 112 slaves and provisions for their welfare; one slave was named Cumberland. Little never returned to England, but there were occasional signs that he had not forgotten it.

Naturalization papers for William Little have not been found, nor is there any indication of his political views. Many of the English and Scots in Charleston did take out naturalization papers, but these documents were often lost to fires or burned with all the possessions of fever patients. According to a letter of 23 Dec. 1799 from a cousin, William had "the fever" that year. There were many indications that he was becoming a good American citizen, one of which was to follow the prevailing custom of naming his first son George Washington.

No picture of William has been discovered, although his brother Thomas had one painted of himself which is now owned by one of his descendants.

Original letters to William Little from his brother George and others in England (microfilm, North Carolina State Archives, Raleigh).