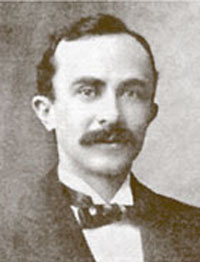 Exum Percival Lewis, physicist and educator, was born in Edgecombe County. His father, Henry Exum Lewis, grandson of Colonel Exum Lewis of the Edgecombe militia, practiced medicine in Edgecombe and Tyrrell counties. His mother, Emma T. Haughton, Dr. Lewis's second wife, died in 1873. After his father's death in 1875, young Lewis was left in difficult financial straits. Because of his own circumstances and the generally depressed conditions in rural parts of postwar eastern North Carolina, Lewis had no formal schooling. He had been encouraged to read and study by a country clergyman, who loaned him books. He improved his reading ability when as a very young man he left North Carolina and went to West Chester, Pa., where he served as a printer's apprentice. A few years later he found a position with the War Department in Washington, D.C., as a clerk. While serving in this capacity he attended night classes at Columbian University (now George Washington University), receiving a B.S. degree in 1888.

Building on the knowledge he had gained from Professor Rowland, Lewis went on to study the nature of the spectra of gases when placed under different conditions of purity, excitation, and the like. In Berlin he experimented with hydrogen, oxygen, and nitrogen in combination with foreign elements and discovered that oxygen or water vapor caused an afterglow or fluorescence when allowed to come in contact with nitrogen discharged into a tube. This process was further developed and led to the discovery of "active nitrogen" by the British Nobel Prize winner, John William Strutt, Lord Rayleigh. At the University of California, Lewis was a member of astrophysical teams sent to observe solar eclipses in the South Seas in 1908 and at Goldendale, Wash., and Ensenada in Lower California in 1918. On these expeditions he concentrated his studies on solar flash and the coronal spectrum.

Lewis was a leader in the study of infrared and far ultraviolet spectroscopy. His lectures on these subjects were said to have been "models of clarity." It was this ability to break new ground and then to explain it so clearly that made Lewis such an asset to his profession. Although he published no books, he wrote a number of articles on various topics relating to spectroscopy and the ionization and conductivity of gases. He was editor of The Effect of a Magnetic Field on Radiation (1900) and contributed sections on "Wave Motion and Light" in Duff's Textbook of Physics (1908). His work appeared in the Astrophysical Journal and other scientific periodicals, and at the time of his death he was working on a textbook on spectroscopy.

Lewis also served on the Berkeley Board of Education from 1905 to 1909 (president, 1907–9). He was a member of the Phi Beta Kappa, Sigma Chi, and Alpha Tau Omega. Although raised as an Episcopalian, he never formally joined any church as an adult.

In 1901 he married Louise Sheppard of San Francisco. They lived in Berkeley and had two children, John Sheppard and Evelyn. He died in Oakland and was buried in the family plot in Sonoma, Calif.

Lewis has been described as a self-made man, a self-taught individual who rose in his profession to become a discoverer and teacher of uncommon ability. He was noted for his sense of honor and for his idealism and devotion to seeking scientific truth, qualities that led him to early support equal suffrage and political reform.