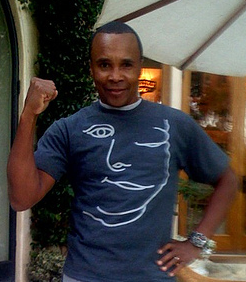 Ray Charles Leonard, known as the boxing champion "Sugar Ray" Leonard (after the champion boxer Sugar Ray Robinson), was born on May 17, 1956 in Wilmington, North Carolina to Getha Leonard and Cicero Leonard, who boxed in the Navy.  Named after Ray Charles, Leonard's parents reportedly wanted him to become a singer, although as young boy he preferred comic books to sports or music.

On his way to earning a Gold Medal in boxing in the 1976 Olympics in Montreal at the age of twenty, Sugar Ray Leonard developed rapidly after joining a Wilmington boxing club in the early 1970s at the age of fourteen. Although he would go on to win an astonishing five titles in five different weight divisions facing such well known opponents as Wilfred Benitez, Roberto Duran, Thomas Hearns, Donny Lalonde, and Marvin Hagler, he began as a lightweight and won a Golden Gloves Award in 1972.  By the mid-70's he had a place on the U.S. team after losing his first bid in 1972.

After his 1976 win in Montreal, Leonard maintained a busy competitive schedule and began to amass a sizeable fortune, winning prizes of more than a million dollars a fight.  Common to many professional fighters, his successes rose and fell for a variety of reasons, including drug and alcohol addiction and severe injuries such as a detached retina, and he went in an out of retirement a number of times into the 1980s and 1990s. In one famous episode in 1987, he came out of retirement to fight Marvin Hagler as a middleweight.  Sugar Ray Leonard won the title in a split decision in the match and then retired.  He came out of retirement again a year later to fight Danny Lalonde as a heavyweight for the World Boxing Council title and in an attempt to win his fourth and fifth class titles to beat Hearns to that distinction. Leonard ultimately won in both classes, but behind Hearns who won his fifth title first.

He had a remarkable career of 36 titles, including 25 knockouts, leading to his induction in the International Boxing Hall of Fame in 1997. He is second only to Mike Tyson in prize earnings. Following final retirment from boxing, Leonard accumulated a number of film and TV credits as both an actor and producer.  He acted in an episode of the TV series Half & Half, a number of episodes of L.A. Heat, an episode of Tales from the Crypt, among others, and he was featured on Dancing with the Stars in 2011. He was cast in a number of films including the action thriller Riot, and produced a number of shows including the TV series Sports Center: The Century's Greatest Athletes. Leonard has also appeared as a fight commentator and motivational speaker. In 2011 he published an autobiography with Michael Arkush The Big Fight: My Life in and Out of the Ring (Viking Books).

Leonard was one of seven children.  In 1980 he married Juanita Wilkinson, with whom he had his first child in 1973. They divorced in 1990 after having two children.  He married Bernadette Robi, a model, in 1993.

1976  Boxing Writers Association of America Fighter of the Year (shared)

1979  Boxing Writers Association of America Fighter of the Year

1981  Boxing Writers Association of America Fighter of the Year

1981  Sports Illustrated Sportsman of the Year

1981  Sports Illustrated Sportsman of the Year

1981  Wide World of Sports Athlete of the Year

1997  Inducted into the International Boxing Hall of Fame

Leonard, Sugar Ray, and Michael Arkush. 2011. The big fight: my life in and out of the ring. New York: Viking.

How can I send Sugar Ray

How can I send Sugar Ray Leonard a email . I am a 7th grader who plays soccer but to get to the point I need a email address so I can get info for my school project. Comment back please. Bye.

Hi I am a 7th grade soccer

Hi I am a 7th grade soccer player and I wanna ask if I could have Sugar Rays email address so I can get some info for my school project. Text back please. See ya bye.

How can I send Sugar Ray

How can I send Sugar Ray Leonard a email . I am a 7th grader who plays soccer but to get to the point I need a email address so I can get info for my school project. Comment back please. Bye.

i need more boxing records and info on titles and family so my teacher will recomend you for the project.

We are updating this entry this week to add more information on Leonard's life, titles, and achievements.  Check back for the updated entry and I will also let you know by separate email when it's been updated.

HI email me if you can I am a

HI email me if you can I am a fourth grader at Ravenscroft School and I am looking for info about you.

I just sent you an email,

I just sent you an email, Emily. I included an address you can use to mail a letter to Sugar Ray Leonard. If you are looking for more information about him, you may be able to find some at the library at Ravenscroft and at the Wake County Public Libraries.

Let us know if you have other questions, though.

Good luck in your research.