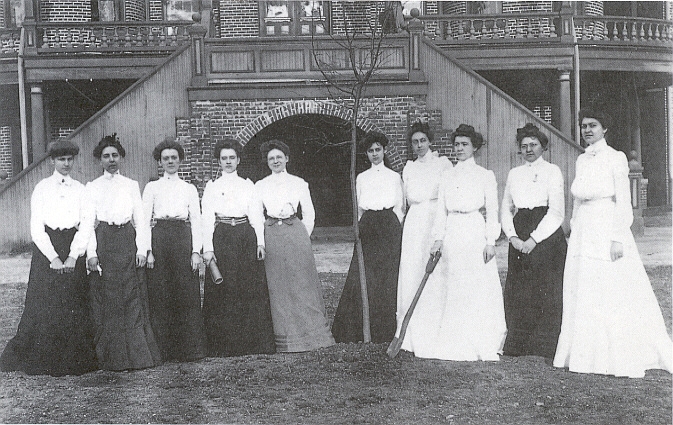 Sophie Stevens Lanneau, educational missionary, was born in Lexington, Mo., the daughter of John Francis and Louise Cox Lanneau. When she was eight, her family moved to Wake Forest, N.C., where her father joined the faculty of Wake Forest College. After attending Wake Forest Academy and Franklin (Virginia) Female Seminary, she entered the Baptist Female University (now Meredith College) where she was graduated in 1902.

While in college, Miss Lanneau decided to devote her life to foreign missions work for the Southern Baptist Convention but after graduation did not meet the minimum age requirement for an assignment. During the next five years she taught public school in Wake Forest, was an instructor of Latin and French at the Baptist Female University, and worked as a teacher in Puerto Rico. She also studied at the Training School in Louisville, Ky. (now part of the Southern Baptist Theological Seminary). On 3 July 1907, she received an appointment by the Foreign Missions Board of the Southern Baptist Convention and accepted assignment to China.

Sophie Lanneau arrived in China in November 1907 and was given responsibility for establishing and managing a small girls' school in Soochow (now Wuhsien). At her insistence, however, she concentrated on mastering the Chinese language first. In 1909 she assumed direction of the school's development. The process of purchasing the land for the facility, constructing the building, and planning for its operation took two years. By the time the school opened on 18 Feb. 1911, she had determined to name it "Wei Ling" (renaissance). She envisioned the school as a means of imparting a Christian view of life to the Chinese, educating Chinese girls, and upgrading the position of women in China. It operated on a small scale during the early years but gradually gained acceptance in Soochow; by 1922, 258 students were enrolled.

While on furlough in 1924, Miss Lanneau took some graduate courses in education at the University of Chicago. At the time, the issue of teaching evolution was raging in Protestant circles. She expressed her consternation at those who opposed teaching evolution, believing that, if successful, they would do a serious injustice to future generations. She returned to China in January 1925 to find an increasingly antiforeign climate in the Soochow area. Miss Lanneau, who was still the principal of Wei Ling School as well as an instructor, moved to replace all missionaries who were in administrative positions with Chinese. In 1926 a Chinese woman was made dean of students. Early in 1927 the fighting associated with the internal Chinese conflict intensified around Soochow and the missionaries sought refuge in nearby Shanghai for four months. During this period, the Chinese administrators operated the school.

By the time Miss Lanneau appointed a Chinese woman as principal in 1928, Wei Ling had an enrollment of 425 students. Sophie Stevens Lanneau, who was given the honorary title of "founder," served as dean of students and instructor until 1937. When the Japanese invaded China in the latter year, she was in Peiping (now Peking) studying at the College of Chinese Studies. Because of the Japanese occupation of Peiping, she was unable to leave for six months. Early in 1938 she was able to join the rest of the Soochow missionaries in Shanghai. They had sought refuge in the international sector of Shanghai when the Japanese hostilities made it impossible for them to remain in Soochow. Miss Lanneau taught in the University of Shanghai for some months while making plans to open Wei Ling on an interim basis in Shanghai in conjunction with three other mission schools. Wei Ling continued operations until December 1941. Enrollment had reached 1,050 when its administrative board closed the school rather than place the lives of the American missionaries in jeopardy following the U.S. declaration of war on Japan.

Miss Lanneau continued teaching at the University of Shanghai until February 1943, when the Japanese placed her in an internment camp. She was released in September when arrangements for a prisoner exchange between the United States and Japan were completed. After a three-month journey by ship, she arrived in the United States. She was met in Washington, D.C., by a representative of the U.S. Signal Corps who attempted to engage her in intelligence work, apparently because of her familiarity with the Chinese language. Then sixty-two, she was exhausted from her recent ordeal and declined to serve in such a capacity.

She returned to Soochow in May 1946. The main problems she experienced in reopening Wei Ling were financing building repairs, dealing with runaway inflation, providing facilities for the large number of students, and coping with the Communists. Her overall goal was to establish the school as a part of a self-sufficient Christian community in Soochow.

Beginning in 1948, the American consulate periodically urged the missionaries to withdraw because of the danger from the Communist forces. The Communists assumed control of Soochow in April 1949. Although Miss Lanneau did not feel that her personal safety was in jeopardy, she realized that hope of continuing missionary work was rapidly fading. By then, because of increasing government pressure, the school had become almost entirely secular. In June 1950, after the United States entered the Korean War, the restrictions on Americans and their activities became more stringent. She attempted to keep Wei Ling open but the presence of the Americans was placing their Chinese colleagues in serious danger. Her departure from China in August 1950 coincided with her scheduled retirement for that month. She had planned to stay for an extended period to study Chinese poetry, but the hostility of the Communists towards missionaries forced her immediate withdrawal from the country.

During her retirement, Sophie Lanneau maintained her interest in China and often expressed dismay about America's alienation from China during the crucial time when China was struggling to assert its dignity and might as a nation. She spent most of these years in Wake Forest, where she died.