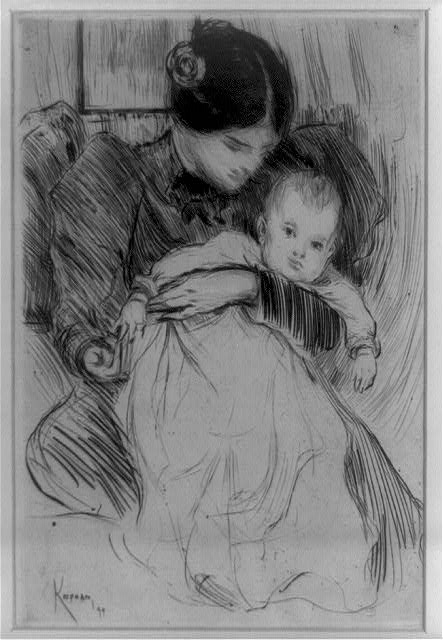 Augustus Koopman, painter and etcher, was born in Charlotte, the son of Bernard and Johanna Koopman. After attending Central High School in Philadelphia, he began art studies at the Pennsylvania Academy of Fine Arts. Later he went to Paris, where he entered the École des Beaux Arts and studied under Bouguereau and Robert Fleury. On 6 May 1897 he married Louise Lovett Osgood of Cohasset, Mass. Koopman made France his home, wintering in Paris and spending the spring and summer in Étaples and in the nearby village of Équihen. He taught painting in Paris from 1896 to 1899 and specialized in portraits while in London from 1902 to 1906.

Koopman has often been called a painter of emotionalism. He found inspiration in the ocean and its storms, disasters, and boats. His Horses Running to Meet a Boat, owned by the St. Paul Art Institute, is a notable representation of his subject. The Wind Storm and A Windy Day are also full of movement and typify Koopman's intense attraction to the sea. In contrast to these is Return of the Shrimpers, which depicts a quiet group making their way home from their boats. For this painting he received a medal in 1904 at the St. Louis Exposition and was invited to exhibit it at the Venice International Art Exposition in 1910. He was an exhibitor at Paris, Munich, London, Venice, and American exhibitions. His early work had many of the qualities characteristic of the modern Dutch artists, especially the marine painters Mesdag and Blommers. Later he became influenced by the impressionists and postimpressionists, and many of his pictures of this later period gained a unique popularity because of their individuality.

Koopman's works covered many themes. He was not essentially a marine painter; he was also a figure painter, using his own children as models. He painted a notable decoration, Industrial Arts, for the U.S. government pavillion at the Paris Exposition in 1900. His figure pictures, The Crystal Gazers and Old Troubadour, are painted with great charm of pose and color. His drypoints and etchings were usually fishermen, scenes in cafés, and figures, all done in careful line.

In 1912 Koopman was elected an associé of the Société Nationale des Beaux Arts, a great honor in the artist's world, and he received many awards, medals, and prizes. Among these were the special silver medal for his decoration at the Paris Exposition, the bronze medals at the Pan-American Exposition at Buffalo (1901) and at the St. Louis Exposition, and a silver medal at the Appalachian Exposition at Knoxville (1911). His portraits and decorations are represented in French and American collections in St. Louis, St. Paul, and Detroit museums; the Philadelphia Art Club; and the Brooklyn Institute of Arts and Sciences. His etchings are represented in the Congressional Library in Washington, D.C., and there is a collection in the New York Public Library. He died of paraylsis in Étaples.

E. A. Taylor, "The Paintings of Augustus Koopman," International Studio, May 1914.