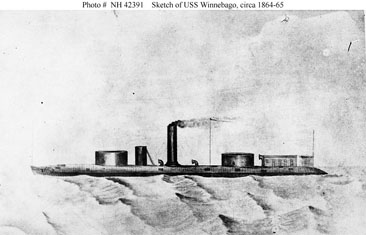 William Alexander Kirkland, naval officer, was born in Hillsborough, the son of Anna McKenzie Cameron and Alexander McKenzie Kirkland, a merchant. In 1850, at age fourteen, he entered the Naval Academy at Annapolis. He was attached to the Portsmouth in 1851 and then to the St. Lawrence before returning to the Naval Academy in 1856, where he was promoted to passed midshipman.

In 1864 he returned to the United States and received his first command, the gunboat Owasco, which was attached to Rear Admiral David G. Farragut's Western Gulf Blockading Squadron. He then commanded until the end of the Civil War the river monitor Winnebago, which was involved—in the last months of the conflict—in the fighting in and around Mobile Bay. The Winnebago blockaded the surviving vessels of the Confederate naval forces at Mobile in the Tombigbee River and was present at their surrender.

Kirkland went back to South America in 1866, this time in command of the Wasp. Two years later Rear Admiral Charles H. Davis, who commanded the South Atlantic Squadron, ordered him to ascend the Paraguay River and rescue Charles A. Washburn, the American minister in Asunción. Paraguay was involved in the War of the Triple Alliance, and Washburn was in danger because of his alleged involvement in a plot to assassinate Francisco Solano López, dictator of Paraguay. Kirkland, who spoke Spanish fluently, in an interview with López threatened war if the minister was not allowed to depart. Although Kirkland acted on his own authority, López bowed to gunboat diplomacy and permitted Washburn to leave on the Wasp. In South America Kirkland acquired the name "El Rubio" because of the publicity given the incident. More than likely his conduct in this affair was at least partly responsible for his promotion to commander in 1869.

In the decade that followed he spent two years ashore (1874–75) on ordnance duty, and the remainder afloat in various commands. He was promoted to captain in 1880, while commanding the Shenandoah on the South American station. From 1883 to 1893 he remained ashore, commanding in succession the Norfolk Navy Yard, receiving ship Colorado, New York Navy Yard, receiving ship Vermont, Harbor of New York, League Island Navy Yard, and, as governor, the Naval Home in Philadelphia. He was promoted to commodore while governor, and shortly afterwards to rear admiral.

In 1894 Kirkland was given command of the South Atlantic Squadron, but within a few months, at his own request, was assigned the European Squadron. Command of a squadron was usually for two years, and Kirkland expected to be promoted to vice admiral when he returned to the United States. In the summer of 1895, his squadron attended the naval review at Kiel, Germany, during the ceremonies for the opening of the Kaiser Wilhelm Canal. Unfortunately, the remainder of his tour was marred by controversy which ultimately led to his removal from the European Squadron command. First he was reprimanded by the secretary of the navy for writing a letter of congratulation (published in the newspapers) to the recently elected president of France, then relieved of his command by President Grover Cleveland for alleged public statements critical of American missionaries in Turkey. The European Squadron had been ordered to the eastern Mediterranean to protect the missionaries during the Armenian massacres. Cleveland ordered Kirkland to be replaced in October 1895, after the rear admiral made antimissionary remarks widely publicized in the press. Religious and missionary organizations also desired him removed because of his refusal to keep the squadron in Turkish waters, although Kirkland had reported that the missionaries were in no immediate danger.

Kirkland was not promoted to vice admiral, despite Assistant Secretary of the Navy Theodore Roosevelt's recommendation. From 1896 until his death, he commanded the Mare Island Navy Yard. At the time of his death he was first on the list of rear admirals, having had forty-eight years of service. He was buried in the Naval Academy Cemetery at Annapolis, Md.

Kirkland was a respected and colorful officer in the old navy, where he was known throughout the fleet as "Red Bill" because of his sandy hair, florid complexion, and fiery nature. In 1860 he married Consolación Victoria Gowland of Montevideo, Uruguay; she died in February 1909. They had five children (Anna Rebecca, Maria Isabel, Florencia Maria, Roberto Lathrop Gowland, and William Alexander), all born in Montevideo.

"Admiral Kirkland Here; Has No Criticism Because of His Recall from Abroad."  New York Times (New York), November 25, 1895.