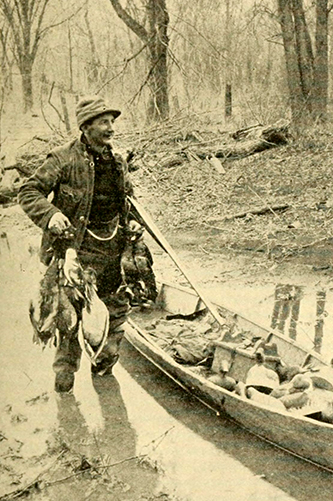 Horace Sowers Kephart, writer, outdoorsman, and librarian, was born in East Salem, Pa., the son of Isaiah L., a teacher, editor, and clergyman, and Mary Elizabeth Sowers Kephart. His ancestors had been among the first settlers of the mountain wilderness west of the Susquehanna. In 1867 the family moved to Jefferson, Iowa, and in 1871 to Western, Iowa, where Kephart attended Western College for a year. In 1876 his family returned to Pennsylvania, and he entered Lebanon Valley College in Annville, graduating with the A.B. degree in the spring of 1879. That fall he enrolled in the College of Liberal Arts of Boston University. In addition to studying under Alphaeus Hyatt—the distinguished zoologist—he enjoyed "the blessed privilege of studying whatever I pleased in the Boston Public Library." Thus evolved his career for the next twenty years.

In 1880 Kephart went to Cornell University, in Ithaca, N.Y., where he assumed supervision of cataloguing the library's holdings and took courses in history and political science. At the library he worked for Cornell's first librarian, Willard Fiske, who became a personal friend and benefactor. Independently wealthy, Fiske moved to Italy in 1883 and established his residence at the Villa Forini in the eastern quarter of Florence, where he began to assemble some of the world's finest collections of Dante and Petrarch, Icelandic history and literature, and the Rhaeto-Romanic language. In 1885 he brought Kephart to the Villa Forini to assist in cataloguing and purchasing these materials. In this capacity, Kephart worked in the major libraries of Italy and the Royal Library in Munich. In addition, he took lectures at the Institute di Studii Superiori under Paolo Mantegazza—an eminent physiologist and anthropologist—and made walking trips in the Apennines and Alps.

In 1886 Kephart returned to the United States and accepted a position as assistant librarian at Yale College in New Haven, Conn. The following year he married Laura Mack of Ithaca. While in New Haven, Kephart began his career as a writer. Most of his early writings are related to library matters, but he was also developing an interest in American frontier history. Largely as a result of this interest, he accepted in 1890 the directorship of the St. Louis Mercantile Library Association, "the oldest library west of the Mississippi." Here Kephart built one of the finest collections of Western Americana then in existence. He became an authority in the field, consulted by historians and writers such as Hiram Chittenden and Emerson Hough.

As an exceptionally competent librarian, Kephart resided with his wife and six children in St. Louis for over a decade. After the turn of the century, however, his outlook on life underwent fundamental changes. His interests and writings shifted from librarianship to outdoor life, firearms, and frontier history. He became disenchanted with the basic context of his home life, and he developed a serious drinking problem. As time passed, his main pleasure came from solitary excursions into the Ozark Mountains and the Arkansas swamps. "I love the wilderness because there are no shams in it," he wrote in a notebook. The extended wilderness trips alienated the library's directors, and late in 1903 he was forced to resign from the Mercantile Library. In April 1904 he suffered a nervous collapse and was taken to his parents' home in Dayton, Ohio. His wife returned with their children to Ithaca.

In Dayton, Kephart was preoccupied with the desire to forge for himself a literary career, while at the same time living a wilderness-frontier existence "so that I might realize the past in the present." He was seeking a "Back of Beyond" in which he could find "a . . . place to begin again." After much study he chose the mountains of western North Carolina. In the summer of 1904 he journeyed south by train and set up camp on Dick's Creek, several miles west of Dillsboro in Jackson County. Then, in October, he obtained permission to use an abandoned two-room cabin on the Little Fork of the Sugar Fork of Hazel Creek on the western slope of the Great Smokies in Swain County. From this vantage point he studied the land and the people, supporting his few needs by writing for the popular outdoor and sporting journals of the day. By 1906 he had compiled enough material on how to live in the wilderness to publish Camping and Woodcraft, a storehouse of practical advice, lore, anecdote, and adventure, which became in time the standard work in its field.

Kephart left the Hazel Creek watershed in 1907 and traveled in other parts of the Southern Appalachians. In 1910 he returned to Swain County, where he lived in a boardinghouse in Bryson City most of the year, but during the summers he camped, mostly alone, at favorite sites in the backcountry. Two books on subjects on which he was an authority, Camp Cookery and Sporting Firearms, appeared in 1910 and 1912. The first edition of his major work, Our Southern Highlanders, was published in 1913 (revised and expanded in 1922). Drawing on materials that he collected firsthand (primarily on Hazel Creek and in the Bryson City area) or that he carefully researched, Kephart produced a literary work that is at once historical, sociological, and autobiographical. No book devoted to the Southern Appalachians has been more widely known, read, and respected. It is the classic study of the region.

After 1913 Kephart published Camping (1916) and The Camper's Manual (1923), edited a series of eleven volumes of adventure and exploration ("Outdoor Adventure Library," 1915–17), and labored on a novel entitled "Smoky Mountain Magic" that never got out of typescript. He was active in the establishment of the Appalachian Trail, particularly in plotting the route the trail was to follow through the Smokies and on into northern Georgia. But his most important writing and the major portion of his energies during the 1920s and early 1930s were devoted to the movement that culminated in the establishment of the Great Smoky Mountains National Park. His role in the movement was considerable. He was killed in an automobile accident near Bryson City (where he was buried) before the park became an actuality, but he died knowing it was assured. Two months before his death the U.S. Geographic Board designated that a peak on the high divide of the Smokies, about eight miles northeast of Clingman's Dome, be named Mount Kephart. He was the first living American so honored.

George Ellison, Introduction to Our Southern Highlanders, by Horace Kephart (1976).

"A Proud Moment." Photograph. The book of camping and woodcraft; a guidebook for those who travel in the wilderness. New York: Outing Publishing Company. 1910. Opposite 32. https://archive.org/stream/bookofcampingwoo01keph#page/32/mode/2up (accessed December 2, 2013).