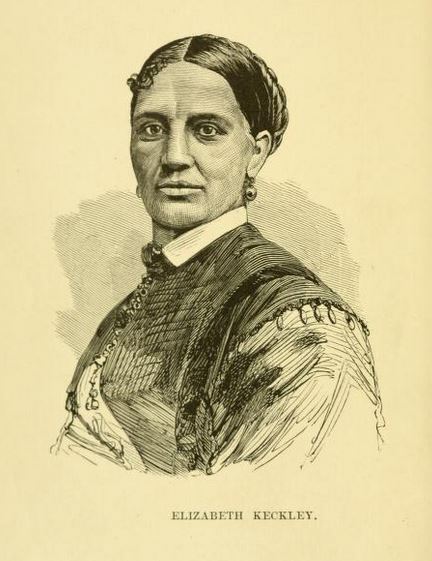 Elizabeth Hobbs Keckly (ca. 1820-1907) was born a slave in the Virginia household of Armistead Burwell around 1820. The man she knew as her father was owned by a different master. Late in life, her mother told her that Burwell was her real father. Burwell loaned Elizabeth to his son Robert who in 1835 accepted the Presbyterian Church pastorate in Hillsborough. Her memoir records brutal treatment at the hands of Burwell and a local schoolmaster, William Bingham. She gives an account of an abusive “seduction” by another neighbor, resulting in birth of a son. In the book she does not indicate his identity, but after she purchased her freedom and that of her son George in St. Louis in 1855, he assumed the name of Kirkland. He joined a Union regiment in 1861 and died in action. It is presumed that Alexander Kirkland, another prominent Hillsborough resident, was his father.

Keckly (also spelled Keckley) records that, in St. Louis, her sewing supported the entire household, seventeen people total. In 1860, Keckly left her alcoholic husband James and moved to Washington, D.C. There she established a dressmaking business, catering to the wives of politicians such as Stephen Douglas and Jefferson Davis. A client recommended her to Mary Todd Lincoln who hired her in March 1861. The two women developed a close friendship (Mary Todd Lincoln once wrote in a letter to Keckly, “you are my best and kindest friend”) and Keckly even assisted the President with his clothes and hair before public appearances. In 1862 Keckly, with women from her church, organized the Contraband Relief Association to aid black refugees.

It is believed that Keckly wrote her memoir with the assistance of a ghostwriter. At the time Keckly reported that she wrote the book in order to help raise money for her friend, Mrs. Lincoln, and to help neutralize harsh criticism of the former First lady. Behind the Scenes, with appended personal correspondence from Mary Todd Lincoln, was published in 1868. Elizabeth Keckly died in Washington in 1907. The authenticity of Behind the Scenes has never been questioned. It has been extensively cited by Lincoln biographers and a book examining the unusual friendship was published in 2003. A dress created by Keckley for Mrs. Lincoln is at the Smithsonian.

Listen to a recording of Elizabeth Keckly's  Behind the Scenes; or, Thirty Years a Slave, and Four Years in the White House, from LibriVox at Archive.org

Please document the claim that Keckly stated in print or otherwise that her mother said she was the daughter of Armistead Burwell. This is stated but I have never read the interview when this was documented.

I am checking with this article's author and will post back here in NCpedia as soon as I know more.  Please check back with us!