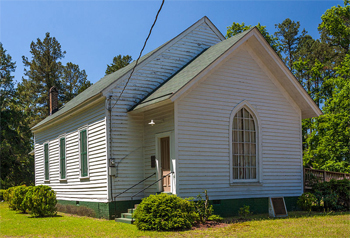 James Hunter, pioneer Methodist minister and leader in the establishment of the Methodist Protestant church in North Carolina in the 1820s, was born in Virginia. As a young man, he moved to Halifax County, where he was received into the Methodist Episcopal church in 1792. On 14 December 1797 he married Martha Elizabeth Crowell, and in 1810 he was "located" as a Methodist minister. Hunter early became identified with the movement in his area for more liberal principles in church government, and he actively supported The Wesleyan Repository, a reform periodical published in Baltimore.

Hunter was present at the first meeting of the Roanoke Union Society on 6 Nov\ember 1824, which met at Sampson's Meeting House in Halifax County. At the second session of the society, held later that month, he was elected secretary pro tem. In April 1828 he was summoned to trial for his membership in the Roanoke Union Society and for patronizing The Mutual Rights, a periodical that strongly advocated structural changes in the government of the Methodist Episcopal church. On 19–20 December 1828, Hunter attended the organizational meeting of the North Carolina Annual Conference of the Methodist Protestant church at Whitaker's Chapel near Enfield. He and the Reverend Henry Bradford were assigned to serve the historic old Roanoke Circuit in 1829.

During some forty years as a Methodist minister, Hunter served as a traveling preacher, presiding elder, and member of the General Conference.