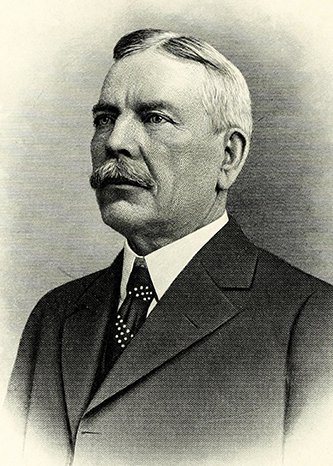 Thurston Titus Hicks, attorney, was born at White Oak Villa in Granville County, the oldest son of Benjamin Willis and Isabella Jane Crews Hicks. The Hicks lands were obtained by deed from Earl Granville to William Hicks on 5 Mar. 1749 and descended undiminished, undivided, and unencumbered to Thurston's father. Thurston was the second of seven children, and his childhood was characteristic of that period of privation and struggle following the Civil War. During the winter months of 1866–75 he attended Pleasant Hill Academy, a local private school operated by Mrs. Asenath F. Cheatham. In 1875 he obtained instruction in Latin by private tutoring under Professor Fred A. Fetter at Oxford.

From 1876 to 1879, Hicks attended Yadkin College, a Methodist-Protestant church college founded in 1856 in Davidson County. This college, presided over by the Reverend Shadrock Simpson, offered the standard curriculum of classics, mathematics, and basic sciences with additional offerings of modern languages and Shakespeare. Its activities included two competitive literary societies, the Ciceronian and the Clark, for student discussion and debate. Hicks distinguished himself as a medalist debater. He was graduated with an A.B. degree in the class of 1879.

In the following year, Hicks served as principal of Shiloh Academy in Davidson County while preparing for the bar. He received his license on 5 Jan. 1881 and, after an unsuccessful year in Oxford, established a permanent practice in Henderson, the seat of newly formed Vance County. Over the years he was involved in a number of cases resulting in legal precedents. Hicks was one of several attorneys for the defense in Gattis v. Kilgo, perhaps the most controversial legal battle in the state's history. This case evolved from criticisms brought by North Carolina Chief Justice Walter Clark, a trustee of Trinity College, that its president, John C. Kilgo, had allied the school's fortunes with the Duke tobacco trust, perverting it from its purpose as a Methodist denominational college. Kilgo responded at a formal hearing of the Trinity trustees. Unwilling to attack Clark directly, he charged that T. J. Gattis, an elderly Methodist minister, was the source of the accusation. Kilgo further charged that Gattis had perjured himself by stating that Kilgo had a reputation as a "wire-puller" but gave conflicting statements at other times. Kilgo's remarks were published by Benjamin N. Duke and others, and Gattis brought suit for libel and slander. The suit was heard four times in the state Supreme Court without Clark's participation and was ultimately resolved in the defendant's favor upon the court's finding that the statements were made under privileged circumstances of response to adverse criticism. The suit was brought in Granville County, and Hicks participated in the defense on its second, third, and fourth hearings. At one point, his brother Archibald, whom he had trained for the bar, appeared as a counsel for the plaintiff.

Hicks was originally a Democrat and so served as mayor of Henderson (1889–91). However, he changed his registration to the Republican party because he objected to the electoral amendment of 1900, modeled on the Louisiana "grandfather clause," insisting on qualifying by literacy (to vote, one had to be able to read and write any section of the Constitution) despite considerable pride of lineage. In 1910, five years after settlement of Gattis v. Kilgo, Hicks received the Republican nomination for state chief justice against the incumbent, Walter Clark, but was defeated in the general election.

On 6 Dec. 1883 Hicks married Mary Horner, daughter of the Reverend Thomas J. and Isabella Norwood Horner. He was survived by two sons and a daughter.

Hicks, Thurston Titus. Sketches of William Hicks, Abner Hicks, Jasper Hicks, George Harris, James Crews, John Earl and something of some of their descendants: with comparisons of present conditions of living with those of sixty years ago. Henderson, N.C.: [T.T. Hicks?]. 1926.