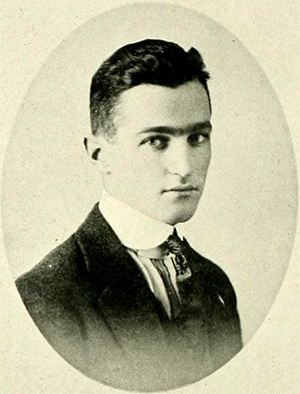 Charles Holmes Herty, Jr., metallurgist and chemical engineer, was born in Athens, Ga., the son of Sophie Schaller and Charles H. Herty, then a faculty member at the University of Georgia. The family moved to Chapel Hill, N.C., in 1904, when his father became head of the Department of Chemistry at The University of North Carolina. He attended the Asheville School and The University of North Carolina, where he studied chemistry and received a B.S. degree in chemical engineering in 1918.

In the summer of 1918 Herty joined the army as a private in the Chemical Warfare Service and headed the chemical plant at Saltville, Va.; he was discharged in 1919 as a sergeant in the Ordnance Department. At the Massachusetts Institute of Technology he earned the M.S. degree in 1921 and the D.Sc. degree in 1924, conducting research that was to be the foundation of his life's work in steelmaking metallurgy at the Buffalo Station of the institute's School of Chemical Engineering Practice, at the Lackawanna Plant of the Bethlehem Steel Company. He continued at the Buffalo Station as a research associate until 1926, when he was appointed head of ferrous metallurgy research at the U.S. Department of Mines in Pittsburgh. In 1931 Herty became director of the Metallurgical Advisory Board, also in Pittsburgh, established in 1926 by a consortium of thirty interested steel companies to carry out research on the physical chemistry of steelmaking at the Carnegie Institute of Technology and the Pittsburgh Station of the U.S. Bureau of Mines.

Prior to his pioneering investigations, few of the chemical reactions involved in the production of steel had been clearly established, and practical open-hearth operators based production on rules of thumb without a theoretical basis. Herty's principal theoretical contributions foresaw the end to this empirical era: he developed the first dependable method for chemical determination of the oxygen content of the steel bath, demonstrated the mechanism of formation of nonmetallic inclusions when deoxidizers are added to steel, showed how to minimize the content of nonmetallic oxide inclusions, devised the first scientifically based system to control iron oxide in slag, determined quantitatively the effects of oxygen and deoxidation methods on the physical properties of finished steel, evaluated deoxidation constants for several important deoxidizing agents in steel, and made many important studies of the fluidity and viscosity of steel slags. Matching his gift of insight into theory was his rare ability to understand and talk with the practical steel operator. It was this combination of scientific and practical talents that translated his theoretical discoveries into practice in steel plants; both executives and operators came to realize that the previously mysterious factors governing steel production actually had a sound scientific basis and could be controlled.

In 1934, when the goals of the Metallurgical Advisory Board had been met, Herty joined the staff of the Bethlehem Steel Company as a research engineer. Named assistant to the vice-president of the steel division in 1942, he continued his work on improving the open-hearth practice and in controlling slag reactions with molten steel. During World War II he served on advisory committees to the War Production Board, especially on the recovery of manganese, a metal required for many kinds of steel; much of the manganese used by the United States had to be imported.

On 13 Nov. 1929, Herty married Kathleen Malloy of San Francisco, and they became the parents of four children: Dorothea, Charles H., III, Kathleen, and Timothy. He died in Bethlehem, Pa., where he was buried in Nisky Hill Cemetery.

Biographical Memoirs of the National Academy of Sciences 31 (1958).