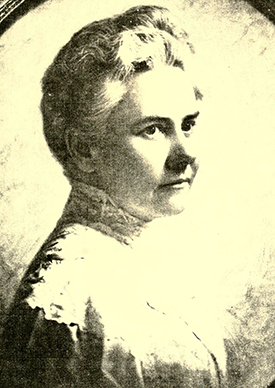 Fannie Exile Scudder Heck, mission leader, was born in Buffalo Lithia Springs, Va., the second of ten surviving children of Colonel Jonathan McGee and Mattie Calendine Heck. Colonel Heck was for a time in Confederate service; though taken prisoner, he was released under a parole of honor. He was later elected to the Virginia legislature; however, when fighting around Richmond seemed likely, he took his family first to Raleigh and later to Buffalo Lithia Springs, Va. It was there that his second daughter was born; the name "Exile" came from the fact that she was born during the family's period of exile. Years later she added "Scudder" to her name to honor her great-grandmother, Jane Scudder Chadwick, a devout pioneer Baptist of Morgantown, Va.

The Heck family moved to Warren County, N.C., in September 1862, and after the war settled in Raleigh. Fannie E. S. Heck was educated at Professor F. P. Hobgood's seminary in the capital city and at Hollins Institute in Virginia. An active member of Raleigh's First Baptist Church, she developed an intense interest in missions and dreamed of an organization whereby missionary causes could be fostered by women of the South. In January 1886, when the State Mission Board formed a Woman's Central Committee of Missions, she was named president. For several years the committee functioned as an arm of the Baptist State Convention.

On 11 May 1888, the Woman's Missionary Union (WMU), Auxiliary to the Southern Baptist Convention, was organized in Richmond. Although North Carolina was not one of the ten states to vote for the new organization, its Central Committee favored the movement and sent two representatives, including Miss Heck, to Richmond. Two years later the committee was authorized to affiliate with the Southern WMU, and in 1891 the North Carolina Central Committee made its first report to that organization. Miss Heck continued as president of the North Carolina group. In 1892, at age thirty, she was elected president of the Southern WMU, an office she held for a total of fifteen years—1892–94, 1895–99, and 1906–15. Illness prevented continuous service. She was also president of the North Carolina WMU from the time of its organization until her death. During her tenure in North Carolina, the number of societies grew from 14 to 1,200, with the annual contribution to missions increasing from $1,000 in 1886 to nearly $50,000 by 1915. Branches were established for young women, boys, girls, and small children.

Miss Heck was influential in the organization of the Woman's Missionary Union Training School in Louisville, Ky., an adjunct of the Southern Baptist Theological Seminary. The Heck Memorial Chapel there is a reminder of her contribution. She was a delegate to the first Ecumenical Conference, held in New York in 1900, and she spoke at the Baptist World Alliance in Philadelphia in 1911. Her concern for youth was shown by her participation in the Student Volunteer and Young People's Missionary Education movements; in appreciation of her work with students at Meredith College, the WMU placed the Heck Memorial Fountain on the campus. She was also involved with a plan to send volunteer teachers to the North Carolina mountains during the summer months, a program launched in 1900 and continued for three years. 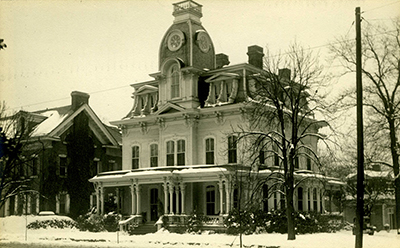 In Raleigh, Fannie E. S. Heck engaged in personal missionary work among the underprivileged. She was active in the organization of the Associated Charities, serving as the first president. Her interest in social welfare programs led to her role as a representative from North Carolina to the Social Service Conference in Memphis, Tenn., in 1913. She was one of the founders and the first president of the Raleigh Woman's Club.

Miss Heck wrote many leaflets; a book entitled In Royal Service, which was a history of the first twenty-five years of the Southern WMU; and the words to "Come, Women, Wide Proclaim," also known as "The Woman's Hymn." For a time she published a monthly paper called The Missionary Talk ; later she was coeditor of Our Mission Fields, a quarterly of the Southern WMU.

Fannie E. S. Heck died after an illness of many months. In addition to legacies to members of her family, she left $100 to the Woman's Missionary Society of Raleigh's First Baptist Church, the interest of which was to be used to pay her annual membership perpetually; $200 to the WMU Training School in Louisville for a new building; and money for several other causes. In two codicils she left small sums to the Raleigh Woman's Club, the YWCA of Raleigh, and other charitable causes. Finally, she left $100 to her brother Charles M. Heck, professor of physics at North Carolina State College, to aid in the employment of a lawyer and a draftsman and to provide other assistance needed to carry through a patent on heat absorption.

The North Carolina WMU, at its annual meeting in 1924, voted to establish an annual offering in her memory, the proceeds to be used for various missionary projects for which other funds were not available. Later renamed the Heck-Jones Offering to honor also Sallie Bailey (Mrs. W. N.) Jones, who succeeded Miss Heck as president in North Carolina, the earnings have been used for buildings, equipment, and projects in mission fields worldwide.

her birthday is June 16,

Thanks for visiting NCpedia and taking a moment to share this information with us.  We appreciate it tremendously when readers take the time to share with us information and supporting resources.  We're investigating updating this biography thanks to your contribution.