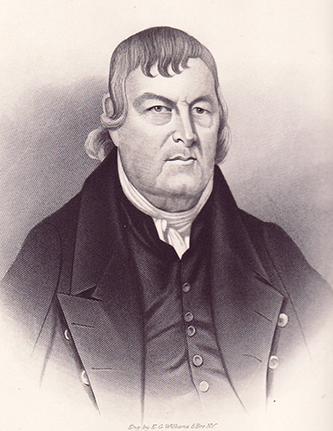 Philemon Hawkins, III, Revolutionary official, landholder, and planter, was born at Pleasant Hill Plantation, the seat of the Hawkins family in present Warren County, the son of Philemon and Delia Martin Hawkins. His brothers, John, Joseph, and Benjamin, served as colonels in the Continental Army during the Revolution. The subject of this sketch was the great-grandson of Philemon and Ann Eleanor Howard Hawkins of Devonshire, England, founders of this branch of the family in America in 1715.

Young Philemon was long in public life, serving eleven terms in the General Assembly between 1787 and 1818 and three on the Council of State between 1781 and 1791; in the latter year, he was president of the Council. He held thousands of acres of land and erected his residence, also named Pleasant Hill after his birthplace, near Middleburg in present Vance County. He was a member of the Church of England, afterwards the Episcopal church.

At age nineteen, Hawkins fought alongside his father, who was Governor William Tryon's chief aide, at the Battle of Alamance during the War of the Regulation; however, both father and son later became ardent supporters of the Revolution. In the colonial period he was commander of the county militia, and in May 1776, as a colonel, was named one of the officers to organize recruits in the Halifax and Edenton districts. He resigned ten days later, perhaps because he was a member of the Provincial Congress. Later he was a member of the 1789 convention at Fayetteville, which ratified the federal Constitution.

Hawkins married Lucy Davis of Roanoke on 31 Aug. 1775, and they became the parents of thirteen children, the oldest of whom was Governor William Hawkins. It is said that he left 131 children, grandchildren, and great-grandchildren.