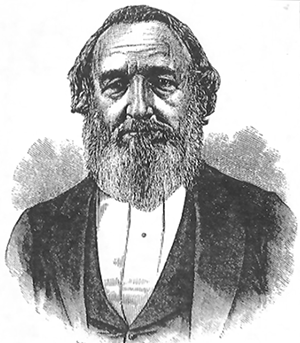 William Hauser, composer, music teacher, editor, physician, and minister, was born near Bethania (then Stokes County). He was a great-grandson of one of the town's earliest settlers, Martin Hauser, an Alsatian carpenter who came to America in 1727 and arrived in North Carolina in 1753, shortly before the first company of Moravians. Martin was a Lutheran but converted after taking shelter in the Moravian stockades during Indian troubles. Many of his descendants remained Moravians, but Hauser's father—Martin Hauser III—turned to Methodism and served that denomination as a local preacher. The Reverend Martin Hauser married Leah Billeter, daughter of a Maryland Quaker, by whom he had eleven children. The youngest was William, who was only two when his father died.

Hauser had little opportunity for education until he reached manhood. Two years after his marriage in 1837 to Eliza M. Renshaw of Rowan County, he moved with his bride to Virginia where he studied Greek and Latin at the newly founded Emory and Henry College. In 1841 they resettled in Georgia, first in Richmond County, where Hauser taught school, then in Burke. Five years later they moved to a farm they named Hesperia, near Wadley, Jefferson County, where they remained for the rest of their lives and were buried. The couple had three children: Carolina Elizabeth (m. Parker White), William Clarke, and Victor McLanndhton.

While residing in Burke County, Ga., Hauser studied medicine under a local physician and began a practice that he continued nearly to the end of his life. Between 1859 and 1861 he contributed seven articles to the Oglethorpe Medical and Surgical Journal, serving as assistant editor for sixteen months during this period. He had performed similar duties in 1854 for a humorous medical journal, the Georgia Blister and Critic. During the 1859–60 school year, he was professor of physiology and pathology at the Oglethorpe Medical College in Savannah.

Hauser joined the Methodist church in 1827. He is said to have served as a local or supply preacher during much of his life. A Southern patriot, he enlisted in the Confederate Army at age fifty and served for ten months as a chaplain in the Forty-eighth Regiment of Georgia Volunteers, until he was severely wounded in the Battle of Chancellorsville.

The physician-preacher is remembered, however, for his work as a musician. Though trained only in rural singing schools and spending most of his life as a country doctor, he built a sizable library of musical publications—journals, encyclopedias, treatises on musical theory, the scores of operas and oratorios, anthologies of songs, and instruction books for the violin, flute, and banjo. This collection was the basis for a series of thirty-eight essays he wrote for publication in the Greens-borough (N.C.) Times from 1857 to 1859. More importantly, Hauser was a shape-note singing master and composer. His compositions are printed with those of many other rural musicians in two tunebooks he edited, The Hesperian Harp (1848) and The Olive Leaf (1878). These volumes were well known in the rural South. As early as 1837 Hauser anticipated publishing a song collection under the title The Southern Harmony, but the book seems never to have been issued.

Hauser intended his tunebooks to please a wide range of musical tastes and was himself free from the musical prejudices common among Methodists of his day (the Iredell Circuit Quarterly Conference censured him in 1838 for venturing to employ the flute and fiddle at his singing schools). But the music he loved most was the singing of "happy christian white-folks and negroes" who, "filled with the Holy Ghost" during services and at camp meetings, "drop the trammels of form and give forth, from full hearts, the sense of what they sing." Accordingly, he absorbed a large repertory of camp meeting and revival spirituals. For his songbooks, he transcribed many of these tunes, giving them three- and four-part vocal settings, often labeling the tunes as ones learned in his youth from his mother or from other North Carolina singers in the 1820s and 1830s. These melodic transcriptions by Hauser provide the earliest known musical record of North Carolina folk singing.