By North Carolina Office of Archives and History, 2021 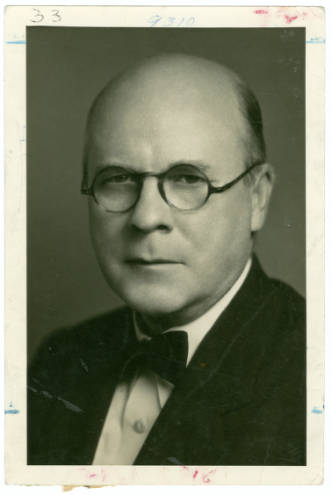 Born in Hillsborough, North Carolina on August 6, 1878, Joseph Gregoire de Roulhac Hamilton came from a family with deep Southern roots. His great-grandfather was Nullification governor of South Carolina. His father came to North Carolina to teach at Hillsborough Military Academy and remained to fight in the 13th N.C. Regiment in the Civil War. Hamilton studied first at home and then did college work at the Sewanee: University of the South, graduating with the M.A. degree in 1900. He taught at the Horner Military School at Oxford before continuing his education at Columbia University (1902-1904) with historian William Archibald Dunning, and was awarded the Ph.D. degree in American history in 1906.  Hamilton, as did many Dunning students, wrote his dissertation about reconstruction in his home state (North Carolina) which was then published as a history book, Reconstruction in North Carolina, in 1914.

Hamilton returned to teaching, first at the Wilmington, North Carolina High School (1904-1906) and then, in 1906, he was appointed an associate professor of history at the University of North Carolina.  He served UNC until his retirement in 1951.  He was among the important historians of his era, however, like many in his time, his writings were slanted to the Lost Cause mythos of Civil War and Reconstruction history, favoring a narrative crafted to support white racial ideology over actual events. His monograph on North Carolina Reconstruction was not refuted for half a century.

While Hamilton’s work as an historian supported white supremacist narratives, it was his work as a nascent archivist for special collections at the University of North Carolina that built a collection to memorialize that narrative.  In 1927 he announced plans for what he initially called the “National Southern Collection.” In 1930, Sarah Graham Kenan gave a gift to establish the Southern Historical Collection.  Hamilton was named as the first director. His manuscript-collecting travels across the South, placing almost a million miles on a series of Ford coupes, are legendary. Some states attempted to block his efforts and he came to be known as “Ransack” Hamilton for his gathering practices. While he gathered and built an amazing collection of southern history materials, it was singular in focus on the history of white southerners.  Recent writings in 2020 argue his tenure was dedicated to shaping the university (and collections) to the benefit of white supremacy.

Nonetheless, some credit the renaissance in southern history in the mid-twentieth century to Hamilton’s foresight (in the collecting of what materials he did gather). In partial recognition of that fact, and his contributions to the field of history, the 1972 new building occupied by the UNC History Department was named for him.  After a reevaluation of his career and contributions, the History Department building was recommended in 2020 for a name change.

Hamilton passed away on November 10, 1961.  He is buried in the Old Chapel Hill Cemetery on the campus of the university.