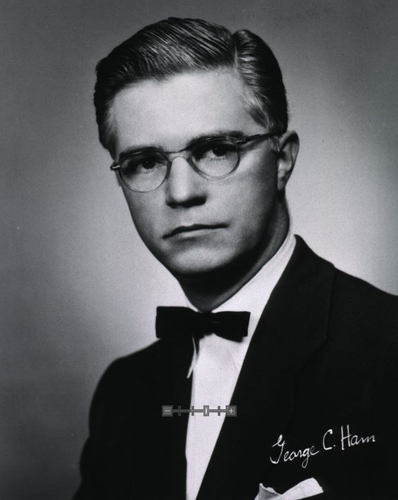 George Caverno Ham, psychiatrist and teacher, was born in Edgewood, Pa., near Pittsburgh, the son of Thomas C. Ham and his wife, Lola Trickey. A brother, Dr. Thomas Hale Ham, also achieved distinction in medical teaching and research. The family later moved to the Philadelphia area where George was graduated from Radnor High School in Wayne. After completing his undergraduate studies at Dartmouth College, he entered the medical school at the University of Pennsylvania and was awarded an M.D. degree in 1937. Ham was successively intern, resident, and Edward Bok Fellow in medicine at the Hospital of the University of Pennsylvania. After a year as a Commonwealth Fund Fellow in medicine at the University of Virginia, he returned to the University Hospital in Philadelphia as an instructor.

With the advent of World War II, Ham joined the Army Medical Corps. He was assigned to research, first in the study of physiological changes in man associated with rapid changes in velocity, and then in the effects of drugs on the nervous system. As a result of his experience during the war years, Ham found his lifework: the interactions between the human personality and physiological functions. Hence, when he resumed his career after the war, he entered the field of psychiatry. He first became a psychiatric resident at Michael Reese Hospital in Chicago as well as a training candidate at the Chicago Institute for Psychoanalysis, then under the direction of Dr. Franz Alexander. On completion of his residency in 1949, Ham for two years was a research associate in both the Chicago Institute and the Michael Reese Department of Psychiatry. While in Chicago, he made valuable contributions in the field of psychosomatic medicine and published a series of papers that remain as models for workers in the field.

Late in 1951, Ham accepted the appointment of professor and first chairman of the Department of Psychiatry in The University of North Carolina Medical School, which was in the process of expanding its program to four years. Ham had entered his profession at a time of momentous change. Dynamic psychiatry, founded on much of the best in Western humanism, had proved its worth during the late war. Though widely accepted throughout most of the United States, it was little known in the South. Ham, who possessed both high intelligence and an attractive personality, was an ideal choice to implement this new field of learning. A competent administrator and an enthusiastic teacher, he quickly made his department one of the strongest in the new medical school and one of the best in the nation. But Ham did not confine his efforts to the medical school in Chapel Hill. With the collaboration of state legislator John Umstead and Dr. David Young, he helped modernize and improve the state mental hospital system in North Carolina. In 1964, he retired from teaching and entered private practice in Chapel Hill.

Active in many organizations, Ham was honored by his profession on several occasions. In 1976, he received The University of North Carolina School of Medicine's Distinguished Service Award. He was a charter fellow of the American College of Psychoanalysis and a member of numerous state, regional, and national psychiatric councils and advisory bodies. He lectured internationally and his talents were recognized in many areas.

Before leaving Philadelphia, Ham married Sally Watt who predeceased him by only a few months. They were the parents of a son, George C., Jr. ("Jay"), and a daughter, Mrs. Susan Ham Todd.

Arthur Prange and others, "Commemorative Statement to the Faculty Council of UNC, 9 Dec. 1977" (typescript, Office, Secretary of the Faculty, University of North Carolina, Chapel Hill).