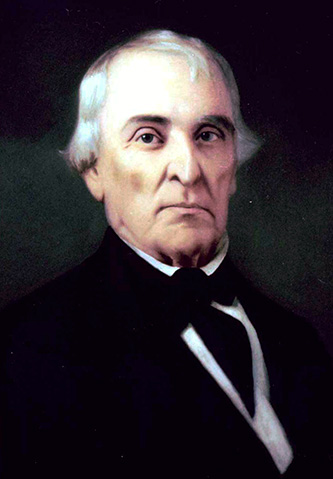 William Hall, governor of Tennessee and congressman, was born in Surry County, the son of William and Thankful Doak Hall. His father was a major in the Surry County militia during the early period of the Revolutionary War. In 1785, at age ten, he moved with his family to Sumner County (now in Tennessee). Later his father and two brothers were killed by hostile Indians. Hall grew to maturity in Sumner County and continued to live there until his death.

In 1796, he was commissioned a second major in the Sumner County militia. The following year he was elected to represent Sumner County in the Tennessee General Assembly, a position he held until 1805. With the outbreak of the War of 1812, he became a colonel of the First Regiment of Tennessee Volunteer Infantry and served under General Andrew Jackson in the Creek war and against the British. He was promoted to brigadier general in September 1813.

Elected to the Tennessee state senate in 1821, Hall represented Sumner County in the fourteenth, fifteenth, and sixteenth sessions. In the seventeenth assembly he was elected speaker. On the resignation of Governor Samuel Houston in 1829, Hall was inaugurated as governor of the state on 16 April. He served as interim governor until the inauguration of William Carroll on 1 Oct. 1829. In 1831 Hall was elected as a Democrat to the U.S. House of Representatives, where he remained until 3 Mar. 1833.

Hall married Mary B. Alexander, and they had seven children: William H., Richard A., Thankful J., Martha, Mary, Alexander, and John A. He died at his home near Castalian Springs, Sumner County, and was buried in the family graveyard on his estate.

J. S. Jones, Biographical Album of Tennessee Governors (1903 [original photograph, available in the copy of this book in the Genealogical Room of the Chattanooga-Hamilton County Public Library]).