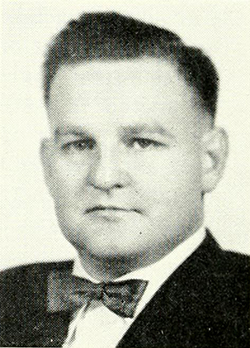 David McKee Hall, congressman, was born in Sylva, Jackson County, the son of David McKee and Edith Moore Hall. He attended the public schools in Jackson County until the age of twelve, when he was stricken with osteomyelitis. This affliction three years later resulted in paraplegia. Confined to a wheelchair in 1933, Hall was unable to finish public high school and underwent some two hundred operations over an eight-year period. Despite this, he entered The University of North Carolina as a special student. A remarkably gifted undergraduate, he went on to earn a Certificate of Law in June 1947 and the LL.B. in June 1948. While in law school, he joined Phi Delta Phi legal fraternity and was selected the Vance Inn Phi Delta Phi student of the year for 1946–47. Hall was the first special student to be graduated from The University of North Carolina Law School with the LL.B. degree.

In the summer of 1947, Hall demonstrated paraplegic mobility methods he had developed at the Congress of Physical Medicine in New York; his innovations were featured in Time magazine. Admitted to the bar in August of that year, he began a law practice in Sylva in 1948 in the firm of Hall and Thornburg. He served as attorney for the towns of Sylva, Dillsboro, and Webster, and for Jackson County. In 1952, he helped organize and was secretary-treasurer of the Jackson County Savings and Loan Association, and was appointed to the Twentieth Judicial District Committee. He also became president of Jackson County Industries, Inc.

Hall was elected to the North Carolina Senate but served only one term, resigning on 5 Aug. 1955 to become a member of the North Carolina Board of Water Commissioners until 1958. However, he continued to work with Young Democrats clubs and was vice-chairman of the Jackson County Democratic Committee from 1948 to 1954. This political experience enabled him to win a seat in the Eighty-sixth Congress, where he served from 3 January 1959 until his death.

In addition to his personal interests in farming and cattle raising, Hall was active in many civic organizations. He was an Elk, Rotarian, and Methodist trustee, and he worked with the local United Fund and the Carolinas Community Services. On 14 July 1944, he married Sarah McCollum. They had three daughters: Sarah Anne, Edith Allison, and Hannah McKee. Hall was buried in the Webster Memorial Cemetery, Webster.

Memorial Services Held in the House of Representatives and the Senate of the United States: Together with Remarks Presented in Eulogy of David McKee Hall, Late Representative of North Carolina (1960).