The Lords Proprietors commissioned Captain Henry Wilkinson (b. ca. 1620) as governor of Albemarle in November 1680 with the hope that he would restore peace. Wilkinson made all the preparations to come to the colony, but he never left England. Born in York, England, around 1620, Wilkinson was a professional soldier who fought for the royalists during the English Civil War. When his military career ended, he tried to work in other occupations, but was a failure. Despite his difficulties, Wilkinson refused to seek a pension or an appointment from the royal government. Around 1679 Wilkinson and his family left York for London.

After making the acquaintance of Wilkinson, the proprietors offered him the governorship of Albemarle. Due to the succession of problems created by Thomas Eastchurch and Thomas Miller, the proprietors placed importance on selecting the right man as governor. To the proprietors, Wilkinson seemed to be that man. He was a stranger with no connection to Albemarle’s factions. The Lords Proprietors believed that Wilkinson would manage the colony’s affairs with moderation and “doe equall justice to all partyes.” They also thought he would make sure the King’s customs duties were collected. Furthermore, Wilkinson offered traits of loyalty, experience, steadiness, and dependability to the proprietors.

The Lords Proprietors instructed Wilkinson to create his government with the Fundamental Constitutions as its basis. They authorized him to establish an impartial court to settle disputes related to Culpeper’s Rebellion. Wilkinson could appoint an acting governor only with the approval of a majority of the council. They also wanted the boundary between Virginia and Carolina properly adjusted and an inquiry into the damages suffered by the King’s officials, so they could receive compensation. The proprietors commissioned one of Wilkinson’s sons as surveyor and proprietary deputy, and another son as register. Wilkinson received blank deputations to appoint new councilors in case the ones chosen by the proprietors do not “behave as they should, in healing all breaches that have been in the Colony.” 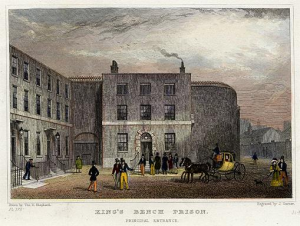 Wilkinson made arrangements for his voyage to Albemarle, planning also to transport his family and servants. In August 1680 he petitioned the king for loan of a ship that was “supplied with Guns and ammunition at his Majesties charge,” but his request brought no reply. He secured the ship, Abigail, and a captain and ten crewmen in April 1681. The ship languished in harbor from April to August 1681 with Wilkinson paying to maintain it. His outstanding debt led to his arrest and he was jailed in London. He remained there for nearly two months before being moved to the King’s Bench Prison. While in prison, persons looking to incriminate one of the Lords Proprietors, Anthony Ashley Cooper, in a plot to seize King Charles II came to see Wilkinson. They hoped Wilkinson would provide incriminating evidence against Cooper. Even though he was bribed, Wilkinson stated that Cooper told him nothing about a plot to seize the king. Wilkinson remained in prison until November 1681, possibly longer. He never reached Albemarle and the rest of his life remained a mystery.