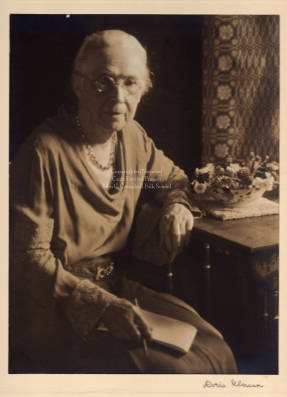 Frances Louisa Goodrich, artist, teacher, and craftsman, was born in Binghamton, N.Y., the daughter of the Reverend William Henry and Mary Prichard Goodrich. She spent her early years and was educated in Cleveland, Ohio. When she was sixteen, her father's health broke and the family went abroad from 1872 to 1874 so that he might have complete rest. For nearly a year she lived with a French family; her reading of French books, begun at that time, was maintained throughout her life. During the same period she also began the serious study of art. Returning to the United States, she attended the Yale Art School and later studied in the studio of a distinguished New York artist. Before 1890, she was exhibiting and selling pictures. Such success, however, did not completely satisfy her. Her great desire was to serve those about her in some more direct and personal way, and in the autumn of 1890 she welcomed the opportunity to join a lonely teacher at Riceville, near Asheville, N.C. After two years, she moved to Brittain's Cove where she built a cottage for herself and a teacher; soon afterwards a schoolhouse and later a church, in memory of her father, were erected.

In 1897, Miss Goodrich moved into the heart of the laurel country at Allanstand in Madison County, at that time a wild and remote area. Allanstand would remain the center of her chief activity until retirement. As the years passed, her educational work spread throughout the region until there were seven day schools under her supervision, most of them also centers for religious activity and for the improvement of agriculture. It was through the cooperation of the Home Board of the Presbyterian Church of the U.S.A. that these schools were built and funds provided to secure excellent teachers for the whole school year.

Though Miss Goodrich's various homes in the mountains were all built at her expense, she found that it gave her a more established position to receive a commission from the Presbyterian Board. During the greater part of her working years, she also was paid a small salary.

While she and the school teacher were living in Brittain's Cove, the seeds of the future Allanstand Cottage Industries were sown. A neighbor brought Miss Goodrich, as a gift, a forty-year-old coverlet, woven in the "Double Bowknot" pattern, golden brown on a cream-colored background. The brown had been dyed with chestnut oak. With the coverlet was the "draft" by which it was woven, a long strip of paper covered with figures—very mysterious to her. As Miss Goodrich wrote: "I was put to my studies." Before her lay a new world—the spinning of wool thread, vegetable dyeing, and weaving, not to mention the techniques involved, especially the weaving. She turned to her mountain neighbor women, many of whom had inherited a knowledge of hand skills from their mothers and grandmothers. With her encouragement they started weaving coverlets for the northern market.

When she reached Allanstand, Miss Goodrich found that in the country about her handweaving was going on as in olden times. There she and her neighbors recognized the potential for a real business, and it was natural to give it the name of Allanstand Cottage Industries and to make that place the center of the work. As the enterprise developed, she had the satisfaction of achieving her three original goals: to save the old craft from extinction, to give paying work to isolated women, and to bring interest into their lives through the joy of making useful and beautiful things. Many related crafts such as quilting, basketry, whittled articles, charming toys, and birdhouses found their way into the sales shop that opened in Asheville in 1908 under the name of Allanstand Cottage Industries. The business was incorporated in 1917.

In 1918, Miss Goodrich retired to live in Asheville. She is recognized as the pioneer in western North Carolina in reviving the traditional mountain hand skills and in adapting them to products salable in contemporary markets. In 1930, she and a group of mountain workers organized the Southern Highland Handicraft Guild. About that time she was approached by several business concerns who wished to buy the Allanstand shop. It was not for sale, but in the spring of 1931 she gave it to the infant craft guild. Also in 1931, she published Mountain Homespun, an account of the revival of crafts in the Southern Appalachians; it included stories of her mountain neighbors with whom she always had enjoyed friendly relations. Moreover, she had the unique characteristic of bringing out the best in her craftsmen.

From her earliest years in the Asheville area, Miss Goodrich was interested in Church and civic affairs. In 1923, she became a member of the First Congregational Church. She was long active in the Business and Professional Women's Club of Asheville, and she was a member of the YWCA and the Current Literature Club. She also had strong ties with Asheville College—a merger of the Home School and the Normal and Collegiate Institute. She became active in the affairs of these two schools soon after her arrival in Asheville and frequently arranged to send students from isolated regions to them. This interest continued after the merger. In 1938, she was awarded the degree of doctor of humanities by the College of Wooster, Wooster, Ohio.

She died in Asheville and was buried in the Goodrich plot, Lakeview Cemetery, Cleveland, Ohio.