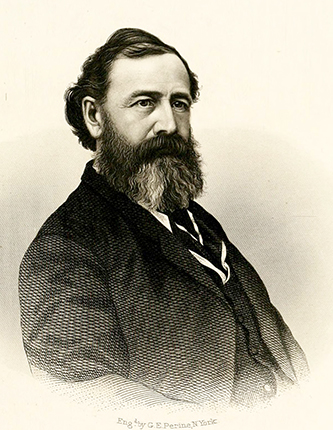 John Robert French, journalist, bureaucrat, politician, and congressman, was born in Gilmanton, Belknap County, N.H. After receiving an education in Gilmanton and Concord, he worked in the office of the Herald of Freedom where he learned the printer's trade in preparation for a career as publisher and editor. For five years he was associated with the New Hampshire Statesman at Concord. He then edited the Eastern Journal at Biddeford, Maine, for two years before settling in Lake County, Ohio, in 1854. There he was successively editor of the Telegraph, the Press, and the Cleveland Morning Leader. A partisan Republican, French was twice a member of the Ohio House of Representatives (1858 and 1859). When Salmon P. Chase, Ohio's Republican leader, became Abraham Lincoln's secretary of the treasury, he appointed French to a position in the Treasury Department. French remained in treasury service throughout the Civil War. In 1864 Lincoln appointed him a member of the Board of Direct-Tax Commissioners for North Carolina.

At the close of the war, French settled in Edenton and became a leader in the organization and direction of the North Carolina Republican party. He represented Chowan County in the Constitutional Convention of 1868. After North Carolina had complied with the requirements of the congressional reconstruction acts, he was elected as a Republican to represent the First District in the Fortieth Congress, where he served from 6 July 1868 to 3 Mar. 1869. He was a member of the Committee on Expenditures in the War Department, introduced one resolution of a private nature, and on 9 Feb. 1869 delivered one recorded speech. This speech, entitled "Equal Suffrage and the Material Development of the Country," was a highly partisan, dramatic appeal for black suffrage nationwide. In support of the proposed Fifteenth Amendment, French contended that emancipation had cleansed the American soul and that the valiant service of the black soldier was a natural prelude to equal political rights. His humanitarian and political instincts led him to contend: "History, sir, will compel us to say that it was the black skin that could always be trusted; it was the black man who never betrayed; where ever you found a negro there was a soul loyal to the Union and true to our country's flag." Having established the black man's loyalty, French turned to recent political restructuring in the South. He concluded: "In the light, then, of experience does not the trial of black voting in the South warrant its extension to all the States? Where in all the history of the world has there been better voting than by the colored men of the rebel states during these last eighteen months? And does not the nation owe it to these faithful friends and their white Union allies in the South that she lift the ban from colored voting and make it universal throughout the Republic?" These sentiments, though hardly representative of southern opinion, do suggest the methods by which Republican ascendency in the former Confederate states was achieved.

In the regular election in 1868 the Republican organization bypassed French and nominated C. L. Cobb as its candidate for Congress in North Carolina's First District. French bolted and ran in his own interest but was defeated. He quit North Carolina. At the expiration of his term in the Fortieth Congress, he was elected sergeant at arms of the U.S. Senate and served from 22 Mar. 1869 to 24 Mar. 1879. In July 1880 he was appointed secretary of the Ute Commission. Later he moved to the West and eventually settled in Idaho, where he was editor of the Boise City Sun until his death. Following a funeral in the Methodist church, French was buried in the Boise City Cemetery, far from eastern North Carolina where the political circumstances of the moment had elevated him far beyond the level to which he might otherwise have risen.

French was married in 1846; his wife, whose maiden name probably was Kimball, died in Edenton. He was survived by a son, E. R. French, of Omaha, Nebr.