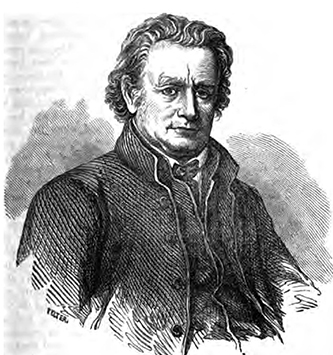 James Bradley Finley, minister, was born in North Carolina (place unknown), the son of Robert W. and Rebecca Bradley Finley. Robert Finley was a Presbyterian minister turned Methodist, and three of his sons became Methodist ministers. He was teaching a Latin school at Rocky River (Anson County?) soon after the American Revolution, and it may have been there that his son James was born. The elder Finley was licensed by the Orange Presbytery on 9 Oct. 1783, but he was not then ordained. While James was a young lad, his parents moved to Virginia and then to Kentucky; in 1796 they settled in Ohio near Chillicothe.

James Finley studied medicine but decided he had little aptitude for it. On 3 Mar. 1801, he married Hannah Strane and they went into the backcountry of Highland County, Ohio, where they lived for several years as backwoods farmers, with Finley supplying the meat for their table from regular hunting expeditions. In August following his marriage, he attended the Methodist camp meeting at Cane Ridge, Ky., and experienced conversion. He later felt a powerful call to preach the Gospel, which he ignored and fought against for seven years before finally entering on trial in 1809 the Western Conference of the Methodist Episcopal Church. In Ohio he served large pioneer circuits and after 1816 was appointed time after time as presiding elder of frontier districts. From 1821 to 1827 he served as a missionary among the Wyandott Indians and wrote at length pleading the cause of these native Americans. Later he served for three years as chaplain of the Ohio penitentiary.

In 1844, Finley was a delegate to the General Conference of the Methodist Episcopal Church where he was the author of the resolution calling for the deposition of Bishop James O. Andrew. The adoption of this resolution led finally to the great division of the church, and Finley was named one of the commissioners to act with a like body from the southern church to define the equity the South might have in the denomination's publication revenues should the annual conferences adopt the plan of separation.

Among the books written by Finley were Autobiography  . . . or Pioneer Life in the West, Wyandott Mission, Sketches of Western Methodism, Life Among the Indians, and Memorials of Prison Life, all of which contain invaluable information about frontier life.

Finley died at Eaton, Ohio, and was buried in a rural cemetery at the outskirts of that village.